LG U+ focuses on youngsters with new AR entertainment

LG U+ focuses on youngsters with new AR entertainment 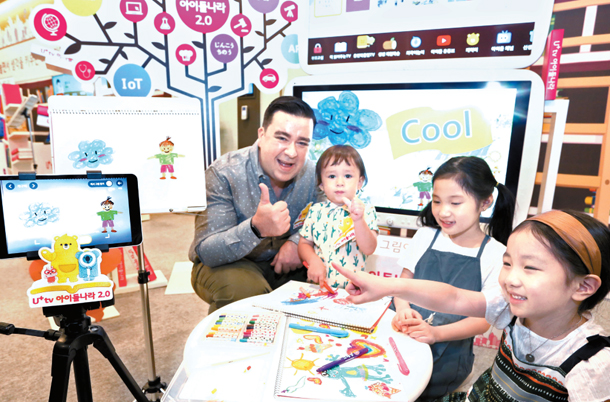 Comedian Sam Hammington, his son William and models play with the new Kid’s World 2.0 platform from LG U+ which features augmented reality technology. [LG U+]

LG U+ is coming for the kids.

The company introduced Kid’s World 2.0, an upgraded version of its child-focused internet TV platform, on Tuesday. Kid’s World 2.0 focuses on expanded use of augmented reality technology.

When an LG demonstrator drew the main characters of the “Three Little Pigs” folktale on a sketchbook and took photos of them with a mobile phone during a press briefing held Tuesday at the LG U+ headquarters in Yongsan District, central Seoul, the images came to life inside the TV screen and started moving. As the tale progressed, the oldest, middle and youngest pig each moved along with the story.

“Kids can literally draw their own picture books and see it on TV,” said Lee Geon-yeong, the director of home media products at LG U+. “AR enables kids to experience many things without leaving their home.”

While there was a simple AR feature in the previous version of the Kid’s World platform, which launched in June last year, the feature could only add images of users to videos.

There are eight new types of AR-based content offered through the new platform, including an interactive picture book. Kids can draw fish and put them into an aquarium inside the TV or pop soap bubbles using motion sensors.

“When high-speed 5G network is commercialized next year, these AR services can develop into other services and content,” Lee added.

The mobile carrier also partnered with Naver to bring the portal service’s translation app Papago into the Kid’s World platform. When kids talk into the TV’s remote control, the Papago character inside the TV can translate it into English, Japanese or Chinese.

When the carrier demonstrated the service Tuesday, the Papago app translated none of the sentences correctly, however. The company said the app usually has a 95 percent voice recognition rate. The new platform also offers a wide range of books by partnering with local education company Woongjin Thinkbig.

LG U+ is not the only telecom targeting the lucrative kids market. KT and SK Broadband are also offering internet TV services catered to kids. KT partnered with local educator Daekyo and is also offering simple AR-based content through its platform Kids’ Land, which launched in May.