Take a summer break with these airline deals

Take a summer break with these airline deals 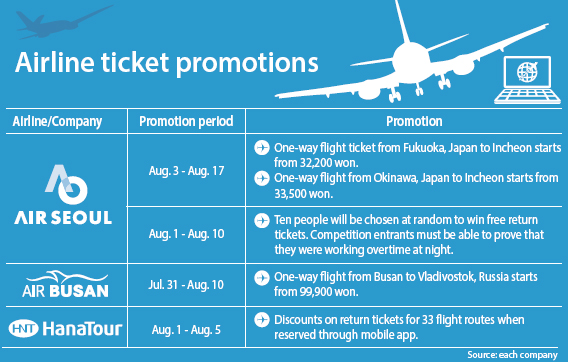 For those thinking it’s too late to book tickets for overseas trips during the summer vacation season, some airlines and travel agencies are offering last-minute promotions.

Air Seoul, the low-cost arm of Asiana Airlines, is rolling out aggressive promotions in time with the launch of its two new flight routes connecting Fukuoka and Okinawa in Japan with Incheon International Airport, according to the airline on Thursday.

While the airline starts flight services connecting Incheon and Fukuoka on Aug. 27 and Incheon and Okinawa on Sept. 21, those purchasing tickets from 10 a.m. today through Aug. 17 will be able to travel from the Japanese cities to Incheon for less than 40,000 won ($35) on specific dates.

According to ticket booking platform Skyscanner, the lowest price offered by local airlines for a one-way flight from Okinawa to Incheon on Sept. 21 was 99,800 won from Eastar Jet, followed by 108,500 won from Jin Air, the budget airline under Korean Air.

“Airline ticket prices may vary depending on the time of reservation, but it is a good deal for our customers as the prices include flight surcharges and airport taxes,” a spokesperson from Air Seoul said.

The airline is also running an event for overtime workers pulling shifts at night during the summer season. People can participate in the event by taking a photo of their colleagues working overtime at night and uploading the photo on Facebook or Instagram with hashtags in Korean designated by Air Seoul.

Ten winners of the event will be granted free round-trip tickets on whichever flight route they choose offered by the airline. The winners will be announced on Aug. 22.

Asiana Airlines’ other low-cost arm, Air Busan, is offering discount tickets for flights leaving from Busan to Vladivostok, Russia, also in time with its launch of the flight route.

While flights connecting Busan and the city located in eastern Russia begin from Aug. 5, those purchasing tickets from July 31 through Aug. 10 will be able to purchase one-way tickets from Busan at 99,900 won.

For the discounted tickets, the departure date from Busan must be between Aug. 5 and Oct. 12. The airline is also randomly selecting 10 purchasers of tickets headed to Vladivostok to give free return tickets to on an international flight route.

Among travel agencies, Hana Tour is offering discounts on its mobile app until Sunday. The discounts are offered on a total of 33 flight routes, including 13 routes bound for cities in Southeast Asia, six to cities in Japan, three to China, five to Europe, three to America and three to Oceania. Departures must be between August this year and February next year.