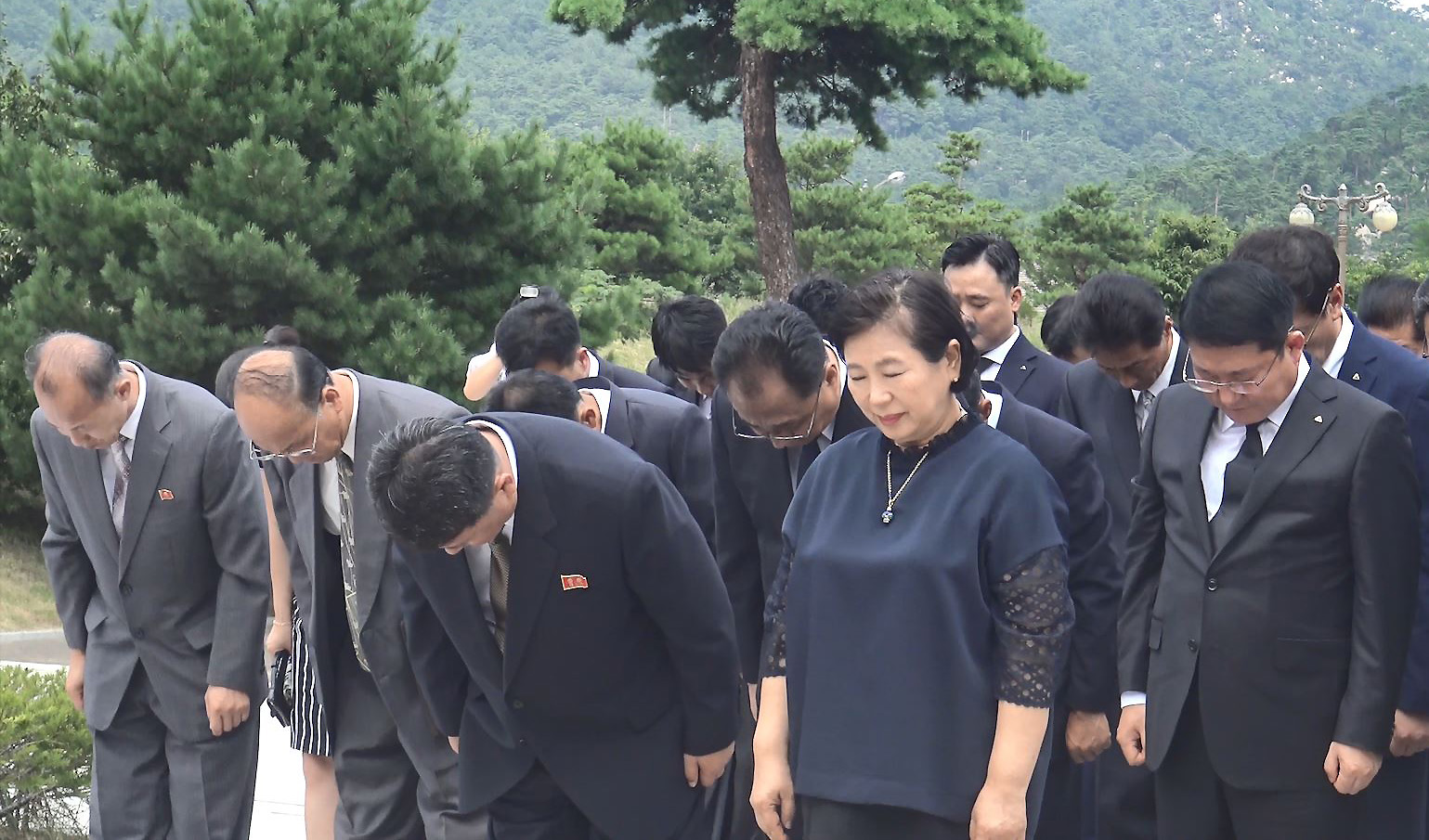 Hyundai Group Chairwoman Hyun Jeong-eun, far right in the front row, bows with company executives and North Korean officials in memory of her husband, the late Chairman Chung Mong-hun, at a ceremony in Mount Kumgang in North Korea on Friday. [YONHAP]

Hyun visited the resort mountain to participate in the memorial service for her late husband and former chairman of the group Chung Mong-hun on Friday.

“I expect the tours could resume within this year,” Hyun said during a meeting with reporters on her return to South Korea’s Customs, Immigration, and Quarantine Office in Goseong County, Gangwon, at around 4:20 p.m. Friday. “The North Korean authorities shared similar thoughts.”

Hyundai Group quoted Kim Yong-chol, vice chairman of the Central Committee of the Workers’ Party of North Korea, as saying “the committee’s trust in Hyundai has not changed. If Hyundai spearheads a joint project, we will always be with Hyundai” in a statement released Friday.

Hyun, however, said there was no detailed discussion regarding future inter-Korean business plans as the main purpose of her visit was to participate in the memorial service.

The group, known for its inter-Korean business arm Hyundai Asan, has regularly held memorial services for Chung in the North since his death on Aug. 4, 2003, recognizing his role in spearheading inter-Korean tour programs. The services were stopped for the last two years due to increased tensions between the Koreas.

As the service resumed after a favorable summit meeting between the two Koreas in April, there were high expectations on whether inter-Korean businesses like the tour to Mount Kumgang - suspended after the fatal shooting of a South Korean female tourist by a North Korean soldier in 2008 - could resume.

There are multiple joint events already scheduled to take place at the resort mountain. On Wednesday next week, authorities from the two Koreas will meet at the mountain to discuss controlling insect pests as part of a forestry cooperation agreement made during the April summit. Later this month, reunions of families separated by the 1950-53 Korean War are also set to be held at the mountain from Aug. 20 through 26.

The North has been pushing the South to resume inter-Korean businesses like the tours and the operation of the Kaesong Industrial Complex. Earlier this week, the North’s state newspaper, the Rodong Sinmun, vented about the slow pace South Korea was taking in reopening the industrial park and resuming tours.

There are remaining barriers, however, in moving forward with inter-Korean projects as North Korea is still under international sanctions and discussions between Pyongyang and Washington on the North’s denuclearization appear to be deadlocked.

Hyundai Group said it will do its best to play a core role in resuming joint economic projects between the two Koreas. According to the group, roughly 20 North Korean officials participated in Friday’s memorial service alongside about 30 people from Hyundai Group.