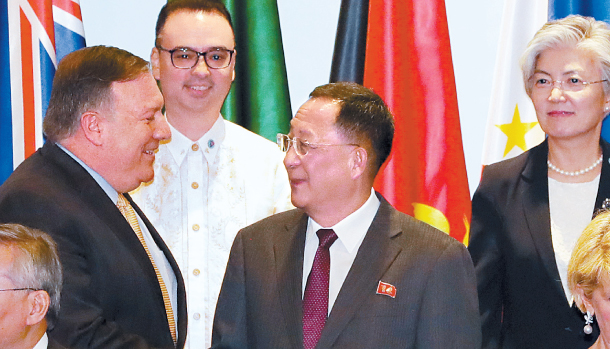 The top envoys of North Korea and the United States, while exchanging niceties on the surface, sent barbs at each other at a regional forum in Singapore over the weekend amid Washington’s additional new sanctions on Pyongyang meant to exert further pressure on the regime to fully denuclearize.

U.S. Secretary of State Mike Pompeo at the Asean Regional Forum (ARF) on Saturday and related ministerial meetings had stern words for North Korea as he stressed its “fully verified denuclearization,” or FFVD, and called upon countries, namely Russia, to fully enforce sanctions on the North until this happens. Washington on Friday imposed additional sanctions on a Russian bank, two North Korean entities and a Moscow-based North Korean official for helping the regime evade sanctions on its weapons of mass destruction program.

Nonetheless, during a group photo session late Saturday at the ARF ministerial meeting in Singapore, Pompeo approached North Korean Foreign Minister Ri Yong-ho to greet him cordially, and they shook hands, exchanged smiles and chatted briefly. The ARF is the sole multilateral regional conference which the North takes part in annually, and also includes the other six-party talks members - South Korea, the United States, China, Russia and Japan.

While formal bilateral talks didn’t happen between Pompeo and Ri on the sidelines of the Association of Southeast Asian Nations (Asean) meetings, Sung Kim, the U.S. Ambassador to the Philippines who led a series of Panmunjom talks with the North, relayed to Ri a white A4-sized envelope containing a letter from U.S. President Donald Trump, in response to an earlier letter from North Korean leader Kim Jong-un.

Pompeo tweeted on Saturday that he had a “chance to speak” with Ri and had a “quick, polite exchange.” He confirmed that the U.S. delegation had the opportunity to deliver Trump’s reply to Kim’s letter. Last Thursday, Trump confirmed he had received a third letter from Kim and thanked him over Twitter.

Pompeo told Ri they should “talk again soon,” the U.S. State Department said, and the North Korean envoy was quoted as having agreed, replying, “there are many productive conversations to be held.”

A confidential report by experts was sent to the UN Security Council on Friday that found that North Korea is continuing with both its nuclear and missile programs. This report said there has been a massive increase in illicit ship-to-ship transfers of petroleum products, as well as through transfers of coal at sea even this year.

The report was conducted over six months by a group of independent experts monitoring sanctions implementation. It further said that North Korea is cooperating militarily with Syria and has tried to sell weapons to Yemen’s Houthis group, reported Reuters.

Pompeo said in a press briefing Saturday that at ministerial meetings he had “emphasized the importance of maintaining diplomatic and economic pressure on North Korea to achieve the final, fully verified denuclearization of the DPRK, as agreed to by Chairman Kim.” He used the acronym for the North’s full name, the Democratic People’s Republic of Korea. He continued, “I called on them to strictly enforce all sanctions, including the complete shutdown of illegal ship-to-ship transfers of petroleum destined for North Korea,” remarks coming as Pyongyang has been seeking sanctions relief.

He specifically called out Russia, citing reports that it is allowing for joint ventures with North Korean firms and granting new work permits to North Korean workers, which he said would be in violation of UN Security Council Resolution 2375.

“We expect the Russians and all countries to abide by the UN Security Council resolutions and enforce sanctions on North Korea,” said Pompeo. “Any violation that detracts from the world’s goal of finally fully denuclearizing North Korea would be something that America would take very seriously.”

At the same time, Pompeo also noted the “progress” that has taken place through the June 12 Singapore summit. He added the United States was “heartened” by the repatriation of the remains of 55 cases of U.S. soldiers who fell during the Korean War, and added that the “work has begun” in the dismantlement of a missile engine test site.

He continued, “I am optimistic that we will get this done in the timeline and the world will celebrate what the UN Security Council has demanded.”

In an interview with Channel NewsAsia in Singapore on Friday, Pompeo said, “The ultimate timeline for denuclearization will be set by Chairman Kim, at least in part. The decision is his.”

After Pompeo departed Singapore for Jakarta, Indonesia on Saturday, Ri expressed that it is “alarming” that the United States appears to be retreating from the June 12 agreement, despite all of the goodwill gestures the North has been taking.

Ri aired grievances, citing steps that North Korea has taken, such as the halting of its nuclear and missile tests, the demolition of its Punggye-ri nuclear test site and the dismantling of its Sohae missile engine test site. He called for the need of “simultaneous actions and phased steps.”

North Korea “stands firm in its determination and commitment for implementing the DPRK-U.S. joint statement in a responsible and good-faith manner,” Ri said in an English transcript of his speech at the ARF retreat at the Singapore COEX convention center. “However, the United States, instead of responding to these measures, is raising its voice louder for maintaining the sanctions against the DPRK and showing the attitude to retreat even from declaring the end of the war, a very basic and primary step for providing peace on the Korean Peninsula.”

His remarks, which come following the return of the repatriations of the remains of fallen U.S. soldiers to Hawaii last week, could be construed as urging Washington to keep its end of the bargain by offering security guarantees and a formal end to the Korean War. Ri even accused the United States of putting pressure on countries to refrain from sending delegates to the North’s 70th founding anniversary celebration on Sept. 9.

Likewise, South Korean Foreign Minister Kang Kyung-wha had a chance to chat with Ri briefly at the gala dinner Friday, but was not able to hold bilateral talks with him because the North rejected the South’s offer for a meeting. North Korean state media reported Sunday that Ri held bilateral meetings with 11 countries including China. Kang told reporters on Sunday that there had been “considerable consultations” over the issue of the formal declaration to end the 1950-53 Korean War with her Chinese and U.S. counterparts, adding that Seoul is approaching the issue with “flexibility in regard to the timing and method.”

The upcoming UN General Assembly session in September may be an “important opportunity,” she added.

She also said that she had a brief but “candid” conversation” with Ri at the gala.

Kang, who kicked off her trip to Singapore Tuesday, held bilateral talks with top diplomats from countries including the United States, Japan, China and Russia. She also attended the Asean plus three meeting and the East Asia Summit, later on Saturday.

On Monday, Lee Do-hoon, the special representative for Korean Peninsula peace and security affairs, will hold bilateral talks with his Chinese counterpart, Kong Xuanyou, in Beijing, according to Seoul’s Foreign Ministry on Sunday. The meeting comes to strengthen “strategic cooperation” between South Korea and China over the Korean Peninsula issues and follows Kong’s three-day visit to North Korea at the end of last month. Lee and Kong, who is also China’s vice foreign minister, may touch on the issue of declaring a formal end to the 1950-53 Korean War.