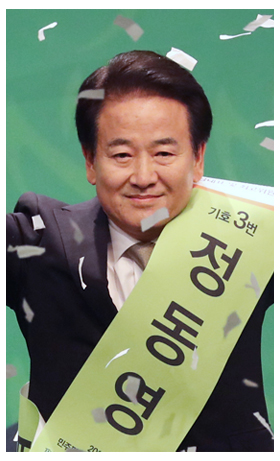 The minor opposition Party for Democracy and Peace on Sunday elected four-term lawmaker Chung Dong-young as its new leader. Chung will be tasked with cementing internal unity and shoring up public support.

In a national party convention held at the Grand Hall of K-Biz of Korea Federation of Small and Medium Business in Yeouido, western Seoul, the former unification minister took the helm of the party, whose approval ratings have been languishing in the single digits, with its members still smarting from a humiliating election defeat in June.

Chung obtained a majority of 68.57 percent in the party’s leadership election. The choice was 90 percent determined by party members’ votes and 10 percent by a general public opinion poll.

Chung replaced four-term lawmaker Cho Bae-sook, who led the party since a group of defectors from a center-left party launched it in February to retain their liberal political platform against a middle-of-the-road political campaign.

The most immediate challenge for Chung is expected to be boosting its support ratings, which have been hovering between 1 percent and 3 percent. He may also face pressure to boost his party’s parliamentary presence, as it has only 14 seats, short of the 20-seat threshold required to form a parliamentary negotiating bloc, observers said.

In 1996, Chung entered politics on the recommendation of late President Kim Dae-jung. That year, he was first elected to the National Assembly. Between 2004 and 2005, when then-President Roh Moo-hyun was in office, Chung served as the unification minister.

During the 2007 presidential election, Chung was the standard-bearer for the then-ruling United New Democratic Party. But he lost by a large margin to opposition candidate Lee Myung-bak.