Bio shares could be hurt by short-selling

Bio shares could be hurt by short-selling 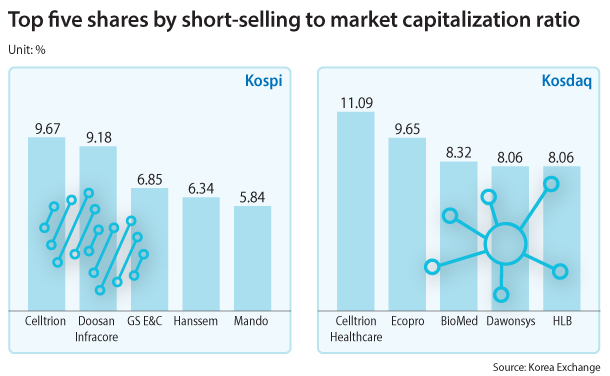 The biopharmaceutical stocks that have been shaking up the secondary market have calmed down in recent days.

Celltrion Healthcare, whose share value fell to 80,000 won, rose to 90,500 won on Monday while ShilaJen shares, which fell to the 40,000 won ($35.50) range recently, closed at 58,500 won on Monday. With biopharmaceutical shares recovering, the bearish Kosdaq is improving.

However, it is still too early to breathe a sigh of relief, as the possibility of the secondary market falling again still remains. The big risk now comes from short-selling, which is when investors borrow shares and sell them immediately on the assumption that share value will decline, which allows them to then repurchase the shares at a lower price.

According to Korea Exchange, as of Aug. 1, pharmaceutical shares’ short-selling balance was estimated at 402.4 billion won. It was more than the 377.6 billion won of stocks short-sold on July 30.

The increase in short-selling indicates that many investors are betting on the stock market falling. The short-selling balance is now 1.28 percent of the Kosdaq’s overall market capitalization, up 0.1 percentage points compared to a month ago. Short-selling of biopharmaceutical companies has gone up on the Kospi index as well.

“The share values of bio companies are not moving according to performances or sales but from other issues, such as the ongoing accounting controversy,” said Jin Heung-kook, an analyst at Korea Investment & Securities.