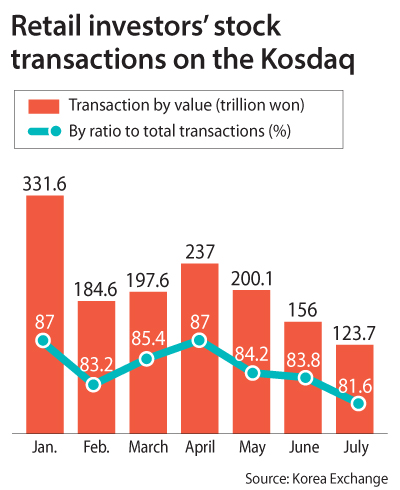 According to the Korea Exchange on Tuesday, retail investors’ stock transactions, which include both sales and purchases, amounted to 123.7 trillion won ($110 billion), which accounts for 81.6 percent of the 151.5 trillion won traded on the Kosdaq.

That’s the lowest since March 1999, when retail investors accounted for 77.7 percent of all transactions made on the secondary market.

The trend is clearer when it comes to average daily transaction value. Retail investors’ daily transactions amounted to 5.6 percent of all trades in July, which is a 30 percent drop from the previous month and half of the 11.3 trillion won reported in April.

The daily transactions of foreign investors fell 23.5 percent to 769.7 billion won compared to April, and institutional investors’ daily transactions shrunk 17.2 percent during the same period to 427.8 trillion won, indicating that individuals are fleeing the Kosdaq in greater numbers.

The shrinking investments are believed to be due to the disappointing performance of the secondary market, despite the government’s efforts, including the announcement of several measures aimed at boosting the Kosdaq.

One of the key reasons behind the Kosdaq’s struggle last month has been the fallout from the ongoing controversy around Samsung BioLogics, which the Financial Supervisory Service is continuing to investigate. The company is suspected of committing accounting fraud that boosted the value of one of its affiliates ahead of the company’s market debut last year. This controversy, which has been going on for three months, has driven down biopharmaceutical shares, which had been the driving force behind the Kosdaq’s bullish rally last year.

Growing investor sentiment that the semiconductor boom may have reached its peak is also affecting technology shares.

In January, the government announced measures targeted at boosting the Kosdaq, including easing regulations that limited companies from listing on the secondary market and tax benefits for investors.