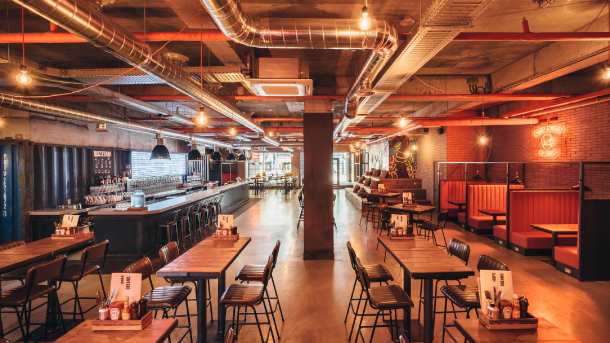 Scottish beer company BrewDog’s new brewpub, which will open in Itaewon, central Seoul on Friday. The bar will brew new types of craft beer that will only be available in Korea based on expertise from the company’s U.K. headquarters. [BREWDOG]

The 500-square-meter (5,381-square-foot) bar near Itaewon Station will be the brand’s second brewhouse in the world and first outside of the United Kingdom. The company runs pubs in more than 50 countries, but only two are brewpubs, which means they have brewing facilities and can produce fresh beer on the spot.

“Global craft beer has been growing faster than ever in the last few years, and among other Asian countries, the expansion speed of Korea was very impressive,” said James Watt, BrewDog’s co-founder. “We have high expectations for the Itaewon branch to act as the center of our strategy to stretch out in Asia.”

Alex Hwang, who will manage the Itaewon brewery, added that Korea was selected for its image as a trendsetter among Asian countries.

The foreigner-friendly Itaewon district in central Seoul is a haven for other tap houses and craft beer pubs. The equipment at BrewDog’s bar will come from Rolec, a German company that specializes in brewing machinery.

“Itaewon is Korea’s craft beer mecca, but because most of the stores were small, it was hard to find pubs with full-fledged brewing facilities,” said BrewDog’s Korea head Kim Tae-kyung.