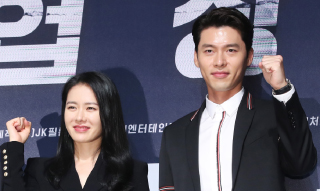 Yet another crime thriller is coming to theaters in 2018. Still, "The Negotiation," set to open next month, is drawing attention for being the first time that Hyunbin and Son Ye-jin, two of the Korean film industry's hottest actors,are co-starring in a film. The movie is produced by JK Film, the studio behind box office hits such as "Haeundae," "Ode to My Father" and "Confidential Assignment."

The new crime thriller tells the story of a police negotiator striving to save two Korean hostages after they were kidnapped in Bangkok by an arms dealer from an international crime ring.

“When I first received the script, I read it in one breath,” Son said during a press conference for the upcoming movie at a Seoul theater on Thursday. “I was so curious about what will happen next in the story all the way through reading it. The script was overwhelmingly tense and immersive.”

Hyunbin said he was interested by the movie’s subject of negotiation, which has never been dealt with in Korean films.

The 20th feature from JK Film will be the directorial debut of Lee Jong-seok, who was the assistant director of “Ode to My Father,” a historical drama seen by 14.26 million people since it opened in local theaters in 2014. He later wrote the script for the mountaineering adventure film “The Himalayas,” which also became a commercial success, drawing an audience of over 7.7 million.