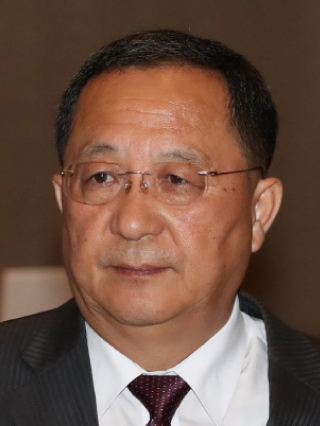 In an English statement about Rouhani’s meeting with Ri on Wednesday in Tehran, the office quoted Rouhani as venting frustration about the United States’ withdrawal from the Joint Comprehensive Plan of Action, also known as the Iran nuclear deal, saying, “The U.S. administration’s performance in these years has led the country to be considered untrustworthy and unreliable around the world [in] that it does not meet any of its obligations.”

In the current situation, the Iranian president continued, “friend countries should develop their relations and cooperation in international communities alongside each other.”

Rouhani’s office did not explain how Ri specifically reacted to the remark, but the North Korean envoy, who was the first senior-level official from the North to visit Iran since Rouhani’s second term began in August 2017, was quoted as saying it was his country’s “strategic policy” to deepen relations with Iran and “confront unilateralism.”

Referring to Ri, the presidential office said, “He also described U.S. withdrawal from the nuclear deal and attempts to restore sanctions as an action against international rules and regulations.”

Rouhani said Tehran was willing to “develop and deepen international relations and cooperation in all fields, including with Pyongyang,” adding both countries have always had close views and supported each other in “many critical international points.”

Ri traveled to Iran after attending a regional security forum in Singapore, where he traded barbs with U.S. Secretary of State Mike Pompeo over a joint agreement their countries’ leaders signed on June 12 at their summit.

Pompeo urged the international community to maintain diplomatic and economic pressure on the North until the regime fully gave up its nuclear weapons. Ri accused the United States of failing to respond to the North’s “good-faith manner” by refusing to declare an end to the 1950-53 Korean War, which ended in an armistice, not a peace treaty, and maintaining sanctions on the regime.

As denuclearization talks between the two countries are deadlocked, the North has been pushing South Korea to play the role of mediator. The regime is expected to urge so again next Monday, when officials from both Koreas gather at Tongilgak, a North Korean-controlled building in the truce village of Panmunjom, for a high-level meeting.