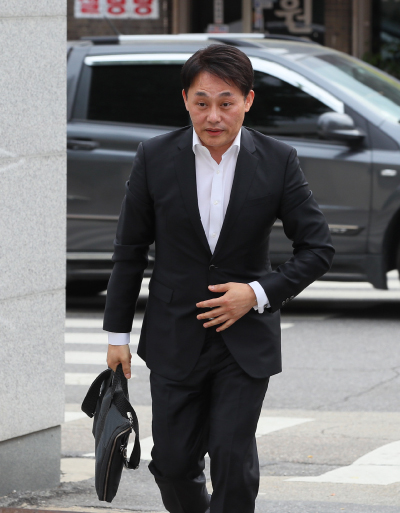 Police on Thursday summoned the former chief executives of a company suspected of defrauding investors with a Russian shipwreck rumored to contain treasure.

Ryu Sang-mi, the former head of Shinil Group, appeared for questioning as a witness on Thursday afternoon. Ryu is the sister of Yu Ji-beom, who allegedly spearheaded the fraud scheme from Vietnam. Police requested Interpol place Yu on its wanted list.

According to authorities, Shinil Group pulled off a cryptocurrency racket by claiming on July 17 to have found the Russian cruiser Donskoi, which sank 113 years ago, in waters near Ulleung Island.

The company encouraged investors to buy its cryptocurrency and promised to pay investors with sunken treasure, which the company claimed to be about 150 trillion won ($133.6 billion) worth of gold bars and other treasures.

Authorities believe Yu, the former head of a Shinil affiliate in Singapore, established a cryptocurrency exchange to facilitate the scheme. Yu has previously been convicted of real estate fraud, according to his acquaintances, and allegedly tried to lie low for the past seven years in Vietnam to avoid investigations here.

Yu allegedly has been using a number of pseudonyms, according to a JoongAng Ilbo source.

While Yu Ji-beom is the name he uses on the official website of the Shinil affiliate in Singapore, Yu Seung-jin is the official name on his identification papers, according to the JoongAng Ilbo.

Authorities on Thursday also summoned Choi Yong-seok, the former CEO of Shinil Group who took over the company on July 26 when Ryu stepped down after police investigations began.

Choi stepped down on Monday amid the ongoing investigation. Both former executives are being questioned as witnesses in the case.

Shinil managed to attract tens of tens of billions of won in investment despite widespread doubts about the company’s claim.

In late July, the Financial Supervisory Service, Korea’s financial watchdog, began a probe into the company, and police began investigating the case around the same time after a company that claimed to have found the Donskoi before Shinil reported the company for alleged investment fraud.

Police the raided offices of Shinil Group in Yeouido and Gangseo District, western Seoul, on Tuesday along with the homes of senior-level employees involved in the case.