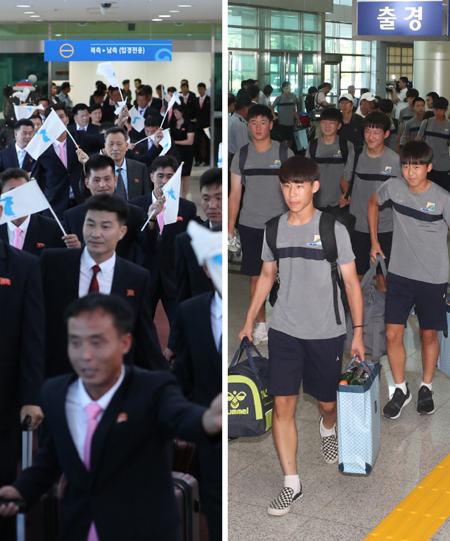 South and North Korea each sent a delegation across the border on Friday to separate friendly football competitions held in Pyongyang and Seoul over the next few days.

Waving unification flags and smiling for the cameras, a delegation representing North Korea’s General Federation of Trade Unions arrived in the South by bus via an overland route along the western coast Friday morning. The group, consisting of 65 players and organizers, will participate in a football tournament with South Korean labor groups for three days.

“Practice?,” said one beaming North Korean player when a reporter asked whether they had prepared for the tournament. “Who needs practice when we are coming to meet our brethren?”

The delegation then headed to a hotel in central Seoul, where they joined a press conference with delegates from South Korea’s two largest trade unions, the Federation of Korean Trade Unions and the Korean Confederation of Trade Unions.

The football match is set to be held Saturday at the Seoul World Cup Stadium in western Seoul, where around 30,000 people, including labor unionists and ordinary sports fans, are estimated to attend.

Friday afternoon, a 151-member South Korean delegation left the same customs office on a bus headed to Pyongyang. That delegation, consisting of 84 young athletes and 26 journalists, will attend a youth football competition until Aug. 19. This is the largest delegation of South Koreans visiting the North since the Koreas renewed exchanges this year.

Two South Korean teams will compete in the under-15 tournament, jointly organized by South and North Korean sports associations, along with six other teams from five countries, including North Korea, China, Russia, Uzbekistan and Belarus. The two Koreas will each field two teams.

The two events are the latest exchanges between the Koreas since South Korean President Moon Jae-in met North Korean leader Kim Jong-un in the first inter-Korean summit this year on April 27. The two leaders signed the Panmunjom Declaration, which included a pledge to promote cooperation exchanges, visits and contact at all levels between the two Koreas.