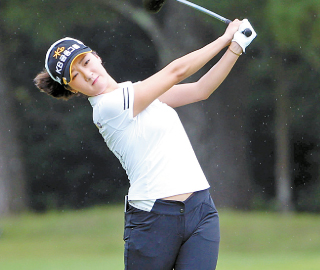 Oh Ji-hyun watches her shot during the final round of the Jeju Samdasoo Masters on Sunday. [NEWS1]

Oh Ji-hyun picked up her second win of the KLPGA season at the Jeju Samdasoo Masters on Sunday.

Oh, who started the final round one shot behind leader Kim Char-young, shot a bogey-free round of four under par, 68, to finish the tournament six shots ahead of Lee Jeong-eun, Choi Hye-jin and Cho Yoon-ji.

By making a long birdie putt on the par-3 third, Oh quickly tied for the lead with Kim. After Kim made a bogey on the par-4 fifth, Oh took a sole lead throughout the entire final round.

Finishing the first nine at one under, Oh started to extend her lead in the back nine. While Oh made back-to-back birdies on the 10th and 11th holes, Kim made another bogey on the par-5 11th, dropping out of contention and allowing Oh to take a big four-shot lead.

With a chip-in birdie on the par-4 16th, Oh once again extended her lead and finished with pars in the next two holes to win the tournament by six shots.

A win on Sunday is even more meaningful for Oh. Last year, she led the board after the second round but finished the tournament 11th after shooting four over par in the final round.

“I don’t have a good memory of this tournament from last year,” Oh said, “and that helped me. I’m happy to win a sponsor tournament and to win at my father’s hometown.”

Oh took home 120 million won ($106,300) and is now the leader on the prize money standing. She has also moved up to second on the KLPGA Tour’s Player of the Year standing, only 13 points behind the leader Choi.

The 22-year-old golfer turned professional in 2013 and mainly played on the Dream Tour and Jump Tour. After finishing 10th in a qualifying tournament, she made her KLPGA Tour debut in 2014.

Since the 2015 season, Oh has won at least one tournament each season. Last year, she won two. The victory on Sunday is her sixth career win on the KLPGA Tour.

Later this month, Oh will seek to defend her title at the Hanwha Classic, a major tournament that she won last year.

Although Choi, a rookie on the tour, gave away her lead in the money ranking, she maintained her No. 1 position on the Player of the Year standing with a runner-up finish of nine under par, at 207.

Park In-bee, the former No. 1 in the women’s world ranking, hoped to pick up her second win of the season on the KLPGA Tour but instead finished tied for fifth by shooting even par, 72, in the final round, finishing the tournament at eight under par, 208.

Ko Jin-young, the tournament’s defending champion, finished tied for 23rd with a final-round score of even par, 72.

Kim, the leader prior to the final round, slipped four spots on the last day with a final-round score of four over par, 76, to finish the tournament tied for fifth.

Although Kim’s last title was the Doosan Match Play Championship in 2017, she hasn’t won a stroke play event since the 2012 SBS Tour Hidden Valley Open.

The KLPGA Tour will continue at the Bogner MBN Ladies Open from Aug. 17 to 19 at the Star Hue Golf and Resort in Yangpyeong County, Gyeonggi.