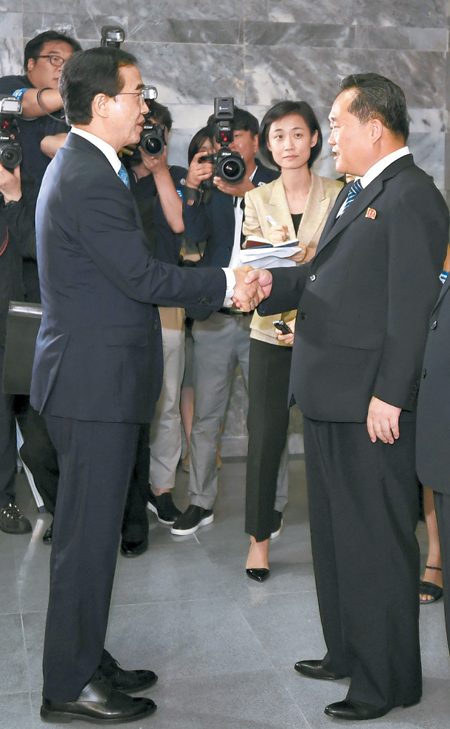 Cho Myoung-gyon, left, the South’s minister of unification, shakes hands with his North Korean counterpart, Ri Son-gwon, chairman of the Committee for the Peaceful Reunification of the Country, after a meeting on the northern side of the border village of Panmunjom on Monday. The two sides agreed on a summit between their leaders in Pyongyang next month but did not announce an exact date. [YONHAP]

The leaders of the two Koreas will meet in the North Korean capital of Pyongyang next month for a third summit, senior officials from the South and North agreed Monday.

Ri Son-gwon, chairman of the Committee for the Peaceful Reunification of the Country, which handles relations with the South, made the announcement after a meeting with his South Korean counterpart, Cho Myoung-gyon, at the border village of Panmunjom.

“[The summit] will be held in September,” Ri said.

However, the two sides did not agree on an exact date. A summit in September will be tricky to schedule because North Korea celebrates the anniversary of its founding on Sept. 9. Another variable is the United Nations General Assembly, which starts on Sept. 18. There is a chance that North Korean leader Kim Jong-un could push for a summit with South Korean President Moon Jae-in before the assembly.

If Kim is hoping to attend the UN General Assembly, which will cast him under intense media spotlight, the summit could take place sometime between Sept. 9 and 18.

Cho, the unification minister, said in a news briefing that the two sides would continue to discuss a date.

“Since the fall summit will be held in Pyongyang as agreed upon in the Panmunjom Declaration, the opinions of the North on this matter are very important,” Cho said. “We have agreed that the summit should be held sooner rather than later.”

Moon and Kim agreed to meet in Pyongyang in the fall during their first face-to-face meeting in April in Panmunjom. In recent weeks, there have been calls for them to meet even sooner to resolve an impasse between North Korea and the United States on the North’s denuclearization.

Washington wants the North to provide a detailed list of its nuclear stockpile and weapons facilities, and Pyongyang wants to replace the armistice that ended the fighting in the 1950-53 Korean War with a peace treaty. The two sides have struggled to find middle ground.

According to a New York Times report Friday, the North is insisting on declaring an end to the Korean War before handing over such a list, fearing that the United States will use the list to carry out pre-emptive strikes on sites of nuclear facilities without a declaration of the end of war. The North is demanding that South Korea be more active in calling on the United States to formally end the three-year conflict that the North started 68 years ago.

Resuming its work as a mediator between the North and the United States, the Moon government sent Chung Eui-yong, Moon’s national security adviser, and Suh Hoon, chief of the National Intelligence Service, to Washington last month over a span of two weeks.

The high-level talks between the two Koreas on Monday were held at a North Korea-controlled building in Panmunjom. The South was represented by Cho, the minister of unification; Chun Hae-sung, vice minister of unification; Nam Gwan-pyo, second deputy director of the Blue House’s National Security Office; and Ahn Moon-hyun, deputy director general in the Prime Minister’s Office.

The presidential office in Seoul expressed the expectation Sunday that the two sides would agree on a date for the Moon-Kim meeting.

“Considering conditions on the ground, we think it will be difficult [to hold the summit] in early September,” said Blue House spokesman Kim Eui-kyeom in a press briefing, referring to the North’s preparations for the celebration of its foundation anniversary on Sept. 9, its 70th.

In the meeting Monday, the two Koreas also reviewed progress being made in other areas of inter-Korean cooperation, such as reconnecting railroads and roads between the two Koreas and holding reunions of separated families. The two sides also agreed to hold an opening ceremony for a joint liaison office in Kaesong, which is now being constructed.

The Monday talks came a day after the North expressed dissatisfaction with the pace of inter-Korean cooperation, especially over the railroad modernization projects.

Uriminzokkiri, a North Korean government-run propaganda website that caters to audiences outside the country, said Sunday ongoing South-North cooperation in various fields wasn’t leading to substantial improvement in bilateral relations and fell short at “forming the atmosphere” for it. Pyongyang specifically vented its frustration about modernization work on North Korean railways and roads that South Korea agreed to assist, saying Seoul was only interested in aspects of the project that “don’t require money,” such as joint research. Seoul has been doing a balancing act when it comes to pursuing inter-Korean cooperation since making investments in the North would be in violation of United Nations sanctions.

At the high-level meeting Monday, the North Korean chief negotiator made a remark signaling the North’s unhappiness about the perceived inaction by the South.

“As I repeat again here, if issues raised at a previous [inter-Korean] meeting are left unaddressed, we could face a set of unexpected problems and derail other projects,” Ri said.

“I emphasize that Minister Cho returns to the South to take appropriate actions [to solve such issues] so that inter-Korean cooperation could proceed according to schedule.”

If the summit is held in Pyongyang next month as agreed, it will be the first visit by a South Korean president to the North Korean capital in 11 years. The last was made by Roh Moo-hyun in October 2007 for a summit with Kim Jong-il, father of Kim Jong-un. Moon Jae-in, who was Roh’s chief of staff at the time, arranged the summit but did not accompany Roh to Pyongyang.