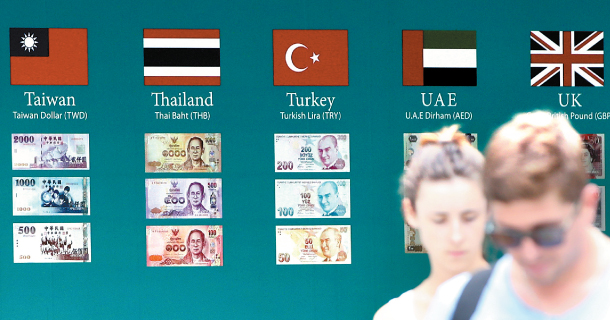 The Turkish lira on display with other currencies at the KEB Hana Bank headquarters in central Seoul on Tuesday. [YONHAP]

Financial unrest in Turkey prompted Korean authorities to calm the market on Tuesday after the country’s stock markets tumbled the day before on jittery investor sentiment.

Yoon Myun-shik, senior deputy governor of the Bank of Korea, said that contagion risk from Turkey’s economic woes, which were triggered by tensions with the United States, are unlikely to have a significant impact on Korea.

“Turkey has large fiscal and current account deficits, but holds a small amount of foreign exchange reserves, which is different from Korea,” said Yoon. “We have different fundamentals, and the impact will also be limited.”

The lira’s dramatic fall rattled both Korea’s main and junior bourses on Monday, and the main Kospi index reached a 15-month low at 2,248.45. But the markets bounced back on Tuesday over eased sentiments, with the Kospi gaining 0.47 percent to close at 2,258.91.

Washington doubled sanctions on Turkish steel and aluminum over the weekend in an apparent response to Ankara’s decision to extend the detention of Andrew Brunson, an American pastor accused of espionage by the Turkish government.

The Korea Center for International Finance, a financial research institution, echoed the positive view on the situation, given that Korea has limited financial exposure to Turkey.

The institution noted that Korean lenders’ links to Turkey are relatively weak, as Korean financial institutions are owed only around $1.2 billion by Turkish borrowers.

“Turkey’s finance and trade largely depends on Europe, and Korea’s exposure is relatively minor,” said the Korea Center for International Finance. It did highlight the possibility of European banks cutting loans to other emerging markets like Korea in light of the Turkish woes.

Some investors fear that the meltdown could translate into broader financial rout in emerging markets. Emerging markets with exceptional imbalances - such as Argentina - are on the watch list.

Park Hee-chan, an analyst at Mirae Asset Daewoo, said that there are few fundamental reasons to count Korea alongside other vulnerable countries.

“The proportion of short-term debt also continued to drop, and now the portion stands at 30 percent,” the analyst said. “It is unlikely that the Korean won will sharply depreciate in the short term.”

The think tank went on to warn that Turkey’s currency crisis won’t be solved in the short term.

“The market consensus is that the financial unrest won’t likely be addressed in the short term because the Turkish government’s diplomatic efforts and its capacity to solve the problem are inadequate,” it said, adding that the Turkish government should increase interest rates and seek aid from the International Monetary Fund.

The Turkish uncertainties appeared to decrease slightly on Tuesday, as the lira rebounded from a record slide a day earlier. The currency was helped by the central bank’s liquidity measures and news of a planned conference call from the country’s finance minister.