Chung Jeh-won
The author is the sports editor of the JoongAng Ilbo.

If Korea wins a gold medal at the Asian Games, striker Son Heung-min will be exempt from military service. That is a big deal. The value of a football player is often indicated in the transfer price, and Son costs 93 million euros ($105.3 million). By comparison, the prize money for winning the World Cup last month was ＄38 million.

The English Premier League season began on Aug. 11, and an astronomical amount of money is involved. The players’ worth, and the size of profits, are operating at, shall we say, a premier level. According to BBC, the Premier League made 4.5 billion pounds (＄5.7 billion) in profit during the 2016-17 season. Most of the income is from television broadcasting rights.

Football is the golden goose of the 21st century. It is a universal language. In Korea, some say that women don’t like to hear stories of men playing football during their military service, but that is not always true. During the World Cup last month, everyone showed off their football knowledge. Women were no exception.

While football is becoming more popular worldwide, it is retreating in Korea. The national team’s performance was worse than that of the 2002 World Cup. The professional K League is “a league of their own.” The public is indifferent to them.

Everyone knows why the K League is so unpopular. The players are slow and prone to passing backward. While the essence of football is scoring goals, many matches in the K League end in 0-0 draws. 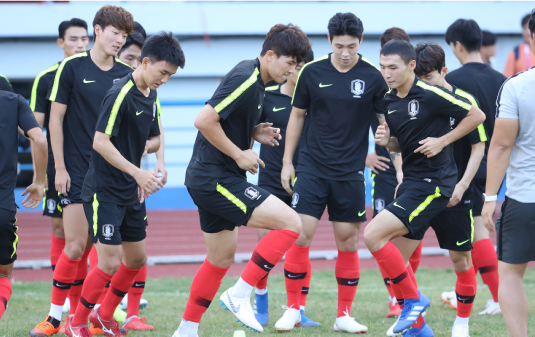 The under-23 Korean football team trains on a field at the Bandung Institute of Technology in Indonesia on Tuesday ahead of the Asian Games. [YONHAP]

In the most recent World Cup, only one match out of 64 ended in a 0-0 draw. During last season’s Premier League, only 8.4 percent of matches ended 0-0.

How long should Korean fans envy the Premier League and La Liga? Can Korea lay golden eggs through football? How about creating a single professional league with China and Japan? Korea has the K League, and Japan the J League and China the Super League. How about combining the three leagues and naming it the “World Football League?” England calls it “Premier,” so why can’t Asia use “World?”

The 21st century is the age of Northeast Asia. China is one of the world’s two biggest economies. Japan overcame 30 years of recession and now enjoys an economic boom. Korea is an economic power that produces the world’s best smartphones and semiconductors. The three Northeast Asian countries leading the global economy should now compete in a new paradigm. It takes less than three hours to get from Guangzhou in China to Seoul and an hour and half from Seoul to Tokyo or Beijing. Major-league players in the United States travel far longer distances.

Most of all, year-round home-and-away games based on home cities will lead to a big boom. Television broadcasting rights can be sold to other countries. Today, Asia buys Premier League broadcasting rights, but it is not impossible that World Football League rights could be sold in the European market.

The tourism effect could be explosive. Fans from Seoul, Busan, Tokyo, Osaka, Beijing and Shanghai will fly to other cities to watch games.