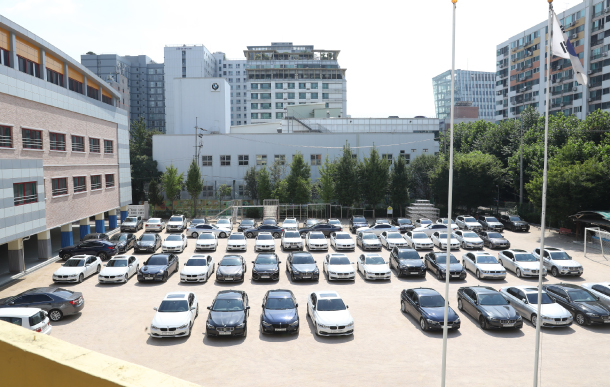 BMW cars wait for safety inspections at an elementary schoolyard in Mapo District, western Seoul, on Tuesday, as the BMW service center next to the school ran out of space. [YONHAP]

BMW owners are decrying the government’s ban on driving uninspected vehicles as victim-blaming, but the luxury vehicles are continuing to burst into flames on Korean roads.

The Ministry of Land, Infrastructure and Transport imposed a fine of up to 10 million won ($8,821) or imprisonment of up to one year for those caught behind the wheel of a BMW that hasn’t passed safety inspections.

BMW owners expressed their frustrations over being treated like criminals by the decision on Tuesday.

They claim that the government’s latest measure puts the responsibility for the BMW crisis on them when they are the victims facing inconvenience and heightened anxiety.

“Until now, [the government] hasn’t been able to act properly, and now they are treating the vehicle owners like criminals,” said a 34-year-old owner of a BMW 320d. “What kind of measure is this?”

“It’s an irresponsible act to pass on damages that are the result of the incompetence of the government to vehicle owners,” said Ha Jong-seon, a lawyer at Barun Law, a firm that is suing BMW Korea and five dealerships on behalf of around 10 BMW owners.

One of the key concerns over the government’s announcement on Tuesday was whether the government can enforce its rule, as it is difficult for the authorities to check every single BMW to see if it has undergone a safety inspection.

“How will the police check every single BMW?” said an official in the automotive industry who requested anonymity. “They [the government] just irresponsibly tossed out a plan that is not practical.” 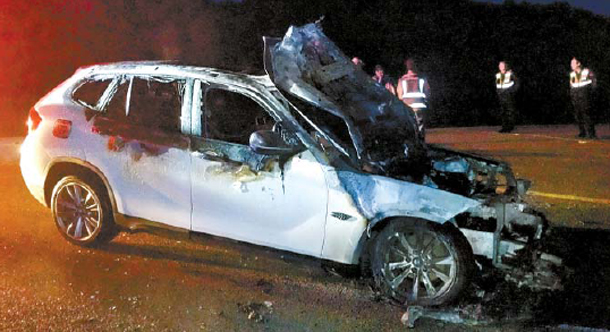 A burned-out BMW X1 sits on a road in Imsil County, North Jeolla, early Wednesday morning after it caught on fire. The X1 was the 40th BMW to catch on fire this year and the first SUV to do so. [YONHAP]

The penalty will go into effect when vehicle owners receive a notification from their local government bodies, which are expected to reach recipients early next week.

The Transport Ministry has been criticized for flip-flopping on the issue, as up until Aug. 6, it insisted that there were no existing laws that could force BMWs off the roads.

Some local governments are reluctant to comply with the Transport Ministry’s plan.

“The crackdown [on BMWs that haven’t gone through inspections] is the work of the police,” said a Seoul government official.

“The owners of the vehicles are they themselves the victims and we have no plans to actively report them as we will be focusing more on safety,” said a Busan government official.

BMW owners also have been under intense pressure from the public as many parking lots have banned the German vehicles from entering over fears that they will burst into flames.

Numerous government buildings, including the Ministry of Interior and Safety’s building located in central Seoul, as well as the government complexes in Sejong and Daejeon, started restricting the entrance of BMWs to their parking lots on Wednesday. All BMWs are not allowed to park in the basement lot, near flammable materials and in above-ground buildings supported by columns that could be vulnerable to fires.

Some of the drivers have even posted on their rear end that the BMW that they are driving is the latest model and not those that have been recalled to ease other drivers on the street.

BMW Korea is providing temporary rental cars to owners who have to get their vehicles repaired.

“I’m worried about whether [BMW Korea] will have enough rental cars, and I will have to wait until October and December to fix the exhaust gas recirculation [EGR] module [considered to be the main cause of BMW fires],” said a BMW 520d owner.

One owner said he had to fight with the BMW service center to get a rental car, and the one he got was a basic vehicle from a Korean brand.

However, the government remained confident that BMW Korea would provide free rental cars to owners who request them.

According to the Transport Ministry, as of Tuesday, 81.2 percent of the 106,317 BMWs that were recalled passed the safety inspections.

On Tuesday alone, 7,970 cars passed through the service center. However, over 19,000 vehicles are still waiting to be inspected.

That number could drop to 11,000 by Thursday if a similar number of BMWs pass through the inspections.

Meanwhile, another BMW caught fire at 4 a.m. Thursday, bringing the total number of BMWs that caught fire this year to 40.

The BMW X1 SUV caught fire while traveling on a road in Imsil County, North Jeolla. It was the first SUV model to go up in flames. The X1 was manufactured in April 2012.

Although the X1 is among the models that were recalled, the one that caught on fire was not recalled, as only those manufactured between June 2012 and February 2014 are subject to the recall.

With the addition of the X1, the total number of BMW models not subject to the recall that still caught on fire has increased to 11.