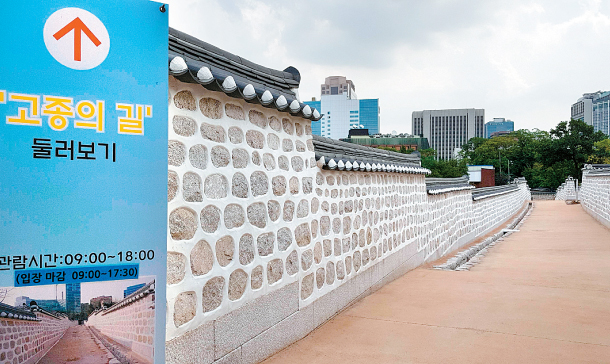 This picture shows a section of the path that King Gojong of Korea’s Joseon Dynasty is believed to have taken during his escape to the Russian legation in 1896. [YONHAP]

Before dawn on a cold February morning in 1896, King Gojong, the last monarch of Korea’s Joseon Dynasty, dressed up in woman’s attire and left Gyeongbok Palace in a palanquin in an effort to flee Japanese troops surrounding the palace.

The king, together with his crown prince riding in a separate palanquin, went straight to the Russian legation about 1 kilometer away and sought asylum there. The escape remains one of the most humiliating chapters in Korean history and illustrates how helpless the country was in the face of Japanese invaders.

The incident has drawn fresh public attention recently as the government restored part of the path that the king is believed to have taken during the escape and opened it for public view despite criticism that the episode isn’t something to show off.

“I feel heavy-hearted to think about the situation at the time,” Hwang Mi-jin, 49, said as she walked along the 120-meter-long (394 foot), 3-meter-wide path near the U.S. ambassador’s residence behind Deoksu Palace. American diplomats at the time called the path “King’s Road” in a neighborhood map.

“We have to learn a lesson from this and make sure this kind of incident won’t happen again,” she said.

Gojong’s asylum bid, known as “Agwan Pacheon” in Korean, came as he increasingly felt threats to his security just a few months after Japanese assassins murdered his anti-Japanese wife, Queen Myeongseong, and set her body aflame in October 1895.

It was when regional powers China, Japan and Russia were vying fiercely for control of Korea. Before Gojong’s asylum bid and the queen’s assassination, Japan had greatly increased its influence over the peninsula after defeating China in the first Sino-Japanese war in 1894-95.

The king stayed at the Russian mission for one year and administered state affairs from there.

His action undermined Japan’s influence while strengthening that of Russia. After ending the asylum, the king proclaimed the establishment of a new country, the Great Korean Empire, in 1897, though the empire fell as Japan formally annexed Korea after defeating Russia in the Russo?Japanese War in 1904-05.

Japan ruled Korea until its World War II defeat in 1945.

Gojong has long been portrayed as a weak and incompetent leader caring only about his own safety when the country was in crisis. That’s why critics raised objections when the Cultural Heritage Administration announced the plan in 2016 to restore the King’s Road.

“Is Agwan Pacheon something that merits commemoration and we should be proud of?” said a message posted on the agency’s website at the time. “Even though we have to let our descendants know of the sad and shameful history, we shouldn’t beautify and distort what he did. Gojong was the king of a fallen nation.”

But some historians have come up with positive assessments of him recently, saying that forging closer relations with Russia was one of the best options he could take at a time when the country was too weak to fight off Japanese invaders on its own.

They also say negative assessment of Gojong was largely influenced by a Japanese colonial narrative.

“Describing Agwan Pacheon as an incident in which the king of a country referred himself to a foreign legation for his own safety is a typical colonial narrative,” Ahn Chang-mo, a professor at Seoul’s Gyeonggi University known for his expertise on royal palaces, said.

“Japan portrayed Gojong as an incompetent, cowardly leader to justify its colonial occupation,” he said.

Ahn also stressed that, given the international situation the country was facing at the time, it was a “reasonable diplomatic decision” for Gojong to seek Russia’s help in standing up against Japan, as the Japan-Britain alliance feared Russia moving south.

“One of the first things Gojong did after entering the Russian mission was to purge pro-Japanese collaborators,” the professor said. “And then he formed a pro-Russian Cabinet. While staying there for a year, he thought about reform projects to transform the country into a modern nation and launched the Great Korean Empire upon his return.”

Ahn said he hopes the restoration of the King’s Road will be a chance for a reassessment of Gojong.

The King’s Road was previously part of a tract of land owned by the United States. In the early 2000s, the embassy sought to build a dormitory for its staff on the land, but the project was halted following revelations that the site is of great historical significance.

After years of negotiations, the U.S. agreed in 2011 to exchange the site for a larger tract of land South Korea owned in Camp Coiner, an American military installation in the U.S. Forces Korea headquarters in Seoul’s central Yongsan district.

“Agwan Pacheon is not just a history of humiliation,” Lee Jeong-yeon, a Cultural Heritage Administration official in charge of royal palace assets, said. “It was from there that the king drew a bigger picture and thought about how he would run the country. One year after Agwan Pacheon, he proclaimed the Great Korean Empire. How much agony would he have gone through during that one year?”