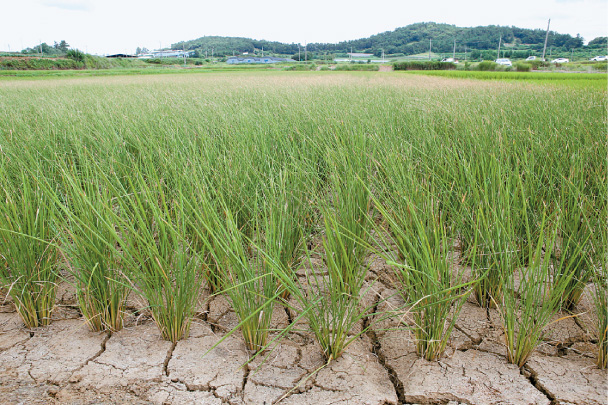 Cracks in the soil of this rice farm in Hampyeong County, South Jeolla, are the result of a long drought that Korea has experienced this summer. [YONHAP]

As an ongoing heat wave continues to hurt supply of fresh produce, the government may soon release more of its emergency stockpile in an attempt to stabilize food prices.

“The government is currently releasing emergency supplies [of fresh produce] so that instability in supply and price will not expand,” Prime Minister Lee Nak-yon said at a meeting with government officials on Thursday, “but government agencies should be prepared to take special action if necessary.”

In the past month, the government has already released 100 to 200 tons of cabbage that were stockpiled during the spring as a safeguard against an anticipated spike in cabbage prices ahead of the Chuseok harvest festival and kimchi-making season.

The government will announce its plan to stabilize produce prices early next month before Chuseok, Lee said.

Despite the government’s efforts, produce prices continue to soar.

Prices of cabbage and radish, two key ingredients in kimchi, have soared 70 percent and 59 percent in the past month, according to the Korea Agro-Fisheries Trade Corporation. Potatoes and watermelons saw their prices rise 56 percent.

Cabbage production is also down 3.8 percent compared to a month earlier, while 7.9 percent fewer radishes are being grown.

The Ministry of Interior and Safety estimated that, as of Monday, more than 2,330 hectares (5,757 acres) of farmland have been damaged by the heat. Of that, 47 percent grew apples and grapes, common staples of the Chuseok ritual table.

Farms raising livestock have also seen a large number of animals dying from the heat, triggering price increases in meat.

President Moon Jae-in waded into the issue on Tuesday when he asked the government to find a way to control produce prices before Chuseok.

On Thursday, the Ministry of Agriculture, Food and Rural Affairs said it would allocate 17.1 billion won ($15.1 million) to provide water, pesticides and other cooling systems to farms.

Another 6 billion won will be used for insurance payments to over 500 farms that have been affected by the heat.

According to the Korea Meteorological Administration, the temperature has now exceeded 33 degrees Celsius (91 degrees Fahrenheit) for 27 days this year, a new record.

The number of nights where the mercury has passed 25 degrees Celsius has equaled the previous record set in 1994 at 14.8 days.

The Korea Meteorological Administration forecasts temperatures of around 35 degrees Celsius over the weekend.