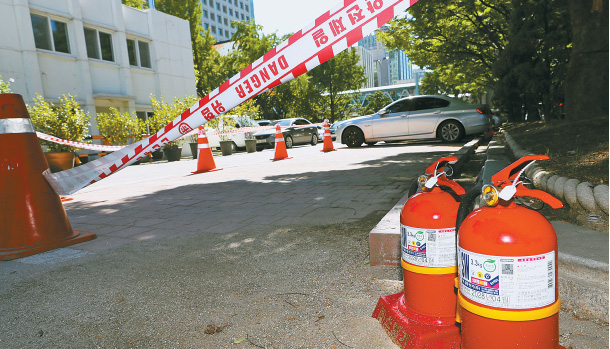 A special section for BMW cars, complete with fire extinguishers, has been created at the government complex in central Seoul on Thursday. [YONHAP]

A group of BMW owners has requested that the Transport Ministry carry out additional tests on the German automaker’s vehicles to find out if there’s really more going on than just faulty emission gas recirculation (EGR) systems.

BMW continues to claim that defects in the EGR cooler and valve are the only cause of the vehicle fires, but owners in Korea and multiple experts are not convinced by their theory considering the frequency of fires here compared to elsewhere.

Three BMW owners, one of whom owns a burnt-out 520d, and their attorney Ha Jong-sun of Barun Law held a press conference on Thursday, publicly requesting that Minister of Land, Infrastructure and Transport Kim Hyun-mee and Prime Minister Lee Nak-yon conduct stress and simulation tests on the recalled vehicles to ensure a clearer investigation into the case.

“We request the ministry roll out stress tests on a 520d vehicle with cameras, including an infrared camera where the vehicle drives at a high speed for a long time with the air conditioner on until the car catches fire,” said Ha at the press conference on behalf of the BMW owners.

“If the car immediately stops and the fire is put out, the research team can figure out where the fire started in the first place. Such a test is done by various carmakers before their launch and it is a pity the ministry didn’t attempt to do it earlier,” Ha added.

The group also requested a simulation test on the 120d model to see whether a car catches fire while the air conditioner is on and it is not moving.

The simulation test is requested based on a case last week when a fire broke out in the glove box of a hatchback 120d model, not in the engine, while it was parked in front of a building with the air conditioner turned on, according to the owners.

Ha Jong-sun, an attorney at Barun Law, right, speaks next to BMW owners during a press conference held at the law firm’s office in Gangnam District, southern Seoul, on Thursday. [YONHAP]

“It implies that there might be other factors to the fires other than just the EGR from the engine,” Ha said.

“There have been recalls in the United States and Europe over fire risks derived from possible defects in electric wiring and electrical overstress. The ministry should take that into consideration when delving into the problem,” he added.

The group also suggested sending one of the torched vehicles to the National Transportation Safety Board, a U.S. government investigative body that analyzes a range of road accidents, if the capacity at domestic institutions lacks. Ha pointed out that Lee Kwang-duk’s burnt-down 520d model, which is being held at a BMW service center in Seongsan, could be a candidate to be sent to the United States.

Ever since BMW cars began to catch fire early July, there was speculation that the EGR module equipped in cars sold in Korea and elsewhere is different, which would explain why Korea is seeing such a high number of fires in a short span of time. Last month, however, Johann Ebenbichler, a vice president at BMW, played down the speculation at an official press conference, claiming that all BMW cars sold globally use the same EGR module.

“It is easy to check whether it is true by taking apart a BMW vehicle in Europe to see whether the manufacturer is the same,” Ha said. “It should be easy by making a request to the Korean ambassador there,” he added.

Meanwhile, the Transport Ministry on Thursday requested municipal governments send out an operation suspension order to owners of some 15,000 uninspected recall models. The uninspected cars are only allowed to be used after being inspected, and if the owner is caught driving the car without it being checked, they could face a fine of up to 10 million won ($8,857) or jail term of less than one year.

BMW Korea said that as of Wednesday midnight, some 91,000 of 106,000 recall-subjected cars have completed safety inspection and an additional 9,700 are on the waiting list.