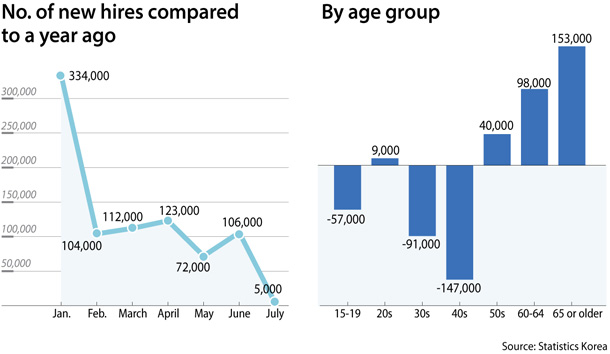 Economy and Finance Minister Kim Dong-yeon canceled his day off on Friday to hold an emergency government meeting after last month’s job report released on the same day turned out to be the worst this year, further tarnishing the reputation of the Moon Jae-in government that took office promising to create quality jobs as a top priority.

According to Statistics Korea on Friday, only 5,000 new jobs were created compared to the same month one year earlier. That’s the lowest number of new jobs created in a month in eight and a half years.

The last time new hires were this low was in January 2010 when 10,000 jobs were lost compared to the previous year.

As a result, the number of people with jobs now amounts to 27.08 million.

The number of people unemployed for July amounted to 1.03 million. For the last seven consecutive months, the number of unemployed people has remained above 1 million.

The number of people who have been searching for jobs for the last 12 months but failed to secure employment saw an increase of 63,000 compared to July 2017, reaching a total of 546,000.

When compared to June’s figure, 35,000 more people were unable to find a job in July.

Despite the government’s effort to boost jobs, the Korean job report has remained disappointing for the last six consecutive months with the new monthly figures in the 100,000 range.

This is the second-longest period when new jobs have been stuck in the 100,000 range. The record was between September 2008, the start of one of the world’s worst financial crises, and February 2010.

According to the Economy and Finance Ministry, the top government officials that attended the meeting - including the Employment Minister, Industry Minister, Land and Transport Minister as well as the Financial Service Commission chairman, the Fair Trade Commission chairman and two Blue House senior aides on jobs and economy - agreed that declining jobs are a combination of different factors at play such as changing demographics, ongoing restructuring in the manufacturing industry and the struggle of small businesses like restaurants and convenience stores.

“Although exports continue to see an increase, it is mostly centered on certain industries like semiconductors, while the performance of the shipbuilding and automobile sectors that are affected by corporate restructuring aren’t doing too good,” said Bin Hyun-joon, director of the employment statistics division at Statistics Korea. “As a result, the level of jobs that have been lost in the manufacturing industry is similar to that of the previous month.”

The minimum wage is also a major factor.

The wholesale and retail industries lost 38,000 jobs, down 1 percent year-on-year. The restaurant and lodging business saw 42,000 jobs go, a 1.8 percent decline from a year ago.

These are jobs that are sensitive to the minimum wage hike. When combined, 80,000 jobs in these sector have disappeared in the last month, a sharp increase in the number of jobs lost even when compared to the 31,000 lost in June.

Jobs in these service industries have been on a decline in the last eight consecutive months. The number of small store owners that run their business on their own have also shrunk 102,000, indicating the difficulties that these businesses are facing.

“Most of the people that run small businesses in restaurants and lodging on their own are those in their 30s, 40s and 50s. As the wholesale, retail, lodging and restaurant industries are shrinking, [we believe] it has affected [the job situation] of those in that age group,” Bin from the statistic agency said.

One of the most worrying figures in the latest job report was the significant decline of jobs for those in their 40s. This is the age group that needs the most income as they face huge expenses such as feeding families and children’s tuition.

Compared to a year ago, this middle-aged group has seen 147,000 jobs lost. This is the sharpest drop in jobs for those in their 40s since August 1998, when the country saw a massive layoff during the financial crisis. That month, 152,000 people in their 40s lost their jobs.

People in their 40s have already had to live through that financial crisis when they were in their 20s and 30s. The number of them that have been hired has been shrinking since the beginning of this year, starting at 52,000 in January, doubling to 107,000 in February and last month, 128,000.

Jobs in the public sector increased the most, up by 149,000 positions, or 7.7 percent, followed by jobs in the information and telecommunication industry with 68,000 jobs, up 8.8 percent and in finance.