Should the people that found a restaurant franchise and develop its menu be allowed to earn money from licensing its trademark?

High-profile trials over the legality of franchise company owners registering trademarks under their own name, rather than under the business name, and taking royalty fees for themselves are attracting attention in Korea. Notable defendants include the heads of Bonif, the company that runs Korea’s biggest rice porridge franchise Bonjuk.

The practice of registering franchise trademarks under personal names is not uncommon in Korea. According to a Korea Intellectual Property Office (KIPO) report published by former Justice Party member Kim Je-nam, 159 out of 216 franchisors with more than 50 stores each had all or some of their trademarks registered under the name of the company head or their family members, not under the name of the company, as of October 2015.

Registering trademarks under individuals’ names is not illegal and didn’t become a big legal issue until October 2015. That was when the Justice Party and several activist groups promoting economic democratization made a civil complaint against the owners of four restaurant and cafe franchises including food conglomerate SPC’s Paris Croissant and Bonjuk for registering trademarks under their own names or the names of their family members.

“The owners of these franchises have unlawfully earned money from trademark royalties,” the groups said in a statement. “This is a breach of duty that passes on a greater financial burden to franchises and consumers.”

After delayed investigations, prosecutors accused the owners of abusing trademark laws and profiting from royalty fees at the expense of their companies early this year.

Some of the defendants have succumbed to legal pressure, transferring trademark rights and royalty fees to their franchise headquarters. But the argument on whether it is wrong for an individual to reap the financial fruits of the franchise they created has yet to be settled between the industry and legal authorities. 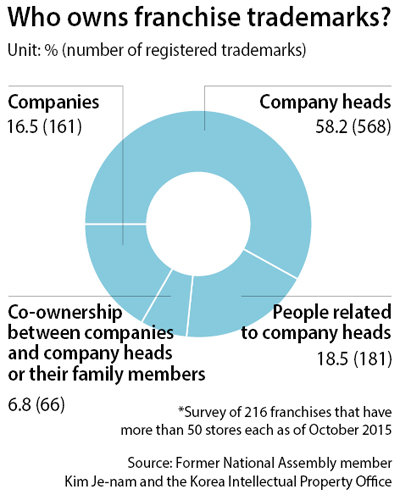 Earlier this year, three out of the four franchise owners included in the Justice Party complaint were indicted by the Seoul District Prosecutors’ Office for breaching the Act of Aggravated Punishment for Specific Economic Crimes.

Prosecutors said Won and One, which operates popular boiled pork chain Won Halmeoni Bossam, SPC Group and Bonif caused damages to their companies by personally registering trademarks and pocketing royalty fees that should have gone to the company to promote the franchise brand.

Prosecutors suspended the indictment of coffee chain Tom N Toms' CEO, the other owner included in the complaint, after he transferred seven trademarks of products he planned to use in Tom N Toms to his company without receiving compensation. Prosecutors also failed to find evidence that he received royalty fees from the trademarks.

The chairman and CEO of SPC Group is facing charges for transferring the full trademark rights of Paris Croissant to his wife in 2012 when she had previously co-owned it with the company Paris Croissant, which manages Korea’s largest bakery Paris Baguette. His wife, who had designed the Paris Croissant logo and owned its trademark since the 1980s, has since returned all 21.3 billion won ($18.9 million) worth of royalty payments she has received and completely transferred the trademark rights to the company without receiving compensation.

Bonjuk co-founders, a married couple, are facing accusations of collecting 2.8 billion won in royalties and trademark transfer fees for three Bonjuk spinoff brands including Bon Dosirak between 2006 and 2013. Won and One's CEO is accused of collecting 2.1 billion won in royalties for five new trademarks he registered between 2009 and January 2018 under a separate one-man company.

Bonjuk continues to defend its decision, claiming it is difficult to view the prosecutors’ indictments as legal breaches.

“It is completely possible and not unlawful for an individual to apply for a trademark for something that he or she created and designed,” was the official line from Bonif back in May.

Bonjuk co-founders, who faced their latest trial on Aug. 13, started Bonjuk from a small restaurant in Seoul’s art and theatre hub Daehak-ro in Jongno, central Seoul, in 2002. They claim to have personally created the menu for all their dishes including the spinoff brands.

Won and One put up a similar fight before admitting to all accusations in June.

“The prosecution’s indictment is only valid if the law requires the trademarks of franchises to be registered under companies and not individuals, but that is not the case,“ the lawyer defending Won and One’s CEO said during the first preliminary hearing in late May. The CEO accepted accusations and agreed to return the full sum of royalty fees he received back to the company in the second preliminary hearing on June 22.

The current Trademark Act actually does not criminalize individual trademark ownership, stating only that “any person who uses or intends to use a trademark in the Republic of Korea may obtain registration of his/her trademark.”

Prosecutors argue, however, that after businesses grow large enough that individuals establish a company to manage them, they have a duty to transfer their trademark rights to their companies in order to help maximize corporate profits.

“Who made the recipe has nothing to do with trademarks,” said a prosecutor related to the Bonif case. “What we care about is the lawful way of using trademarks.”

“The CEO of the company has the responsibility to register a trademark under his or her company, if it is the company spending money to develop and promote a franchise business that is based on the trademark,” said a prosecutor involved with the Won and One case.

On Friday, prosecutors recommended Won and One’s CEO face a four-year sentence, arguing that he has expanded his business at the expense of consumers, franchisees and Won and One by registering his trademarks under his own one-man company.

While the owners of Bonif, Won and One and SPC Group are anxiously awaiting the outcome of their trials, the government is making legal changes to make it tougher for franchise owners to apply for new trademarks.

From May, KIPO began preventing franchise owners from applying for new trademarks under their own names, unless they can specifically submit evidence of how they personally — instead of their company — intend to use the trademarks.

“The improved regulations will serve to reduce conflict between franchise establishments and trademark holders,” said Lee Jae-woo, who serves as head of KIPO’s Trademark & Design Examination Bureau. “It will also simplify trademark management and stabilize operations of franchisees.”

The rise and fall of Addal, once one of the hottest tteokbokki, or spicy Korean rice cake, chains in Korea, served as a bleak warning that personal ownership of trademarks could jeopardize the survival of even the biggest franchises in the country.

After filing for divorce in 2015, the owner of the trademark rights to Addal got the court to ban her husband and his company Otwospace from using the name.

The one thousand or so franchisees that had signed up with Otwospace to run Addal stores were forced to choose between inking a contract with the trademark owner’s new company to continue operating under the name or dropping it and waiting for Otwospace to create a new franchise. There are now just around 30 Addal stores across the country. Many have changed their names to Gamtan Tteokbokki instead.

“KIPO is working to prevent the issue of trademark ownership bringing huge damages to companies so that incidents like Addal are not repeated,” said Baek In-hyun, an employee at KIPO’s trademark examination policy division.

Experts and franchisees support the direction of the changes, though people in the franchise business worry that creators of intellectual property may be denied credit for their work.

“In a franchise system, franchise headquarters give franchisees permission to pursue business by using their trademarks and brand name,” said Prof. Kim Young-kyun, who teaches law and public service at Daejin University.

“Individuals owning trademark rights instead of franchisors have not understood the concept of franchising properly,” he added. “The franchise name and trademark are all included in the franchising system, the trademark should not be owned separately.”

“Unlike in other countries, I think domestic franchise owners register trademarks in their own name because of the unusual way that the franchise industry developed in Korea,” he said. “Though trademarks are supposed to be something you register to prevent competitors from using similar brand names, franchise owners here use them as a tool to maximize personal profits, instead of working for the growth of their franchise brand and franchisees.”

Royalty fees in Korea are typically around 5 percent for the most popular food retail franchises. Some franchise companies demand a set fee from their franchisees regardless of the stores’ size or monthly revenue — Tom N Toms, for example, charges a monthly 800,000 won fee. Many other franchises like Won Halmeoni Bossam include royalty fees indirectly into prices of ingredients or store opening fees charged to franchisees through an initial lump sum.

After decades of franchise owners registering trademarks in their own names, the franchise industry is hesitant to welcome the wave of changes.

“We believe that the creators of a franchise should be entitled to receive the financial credit for their intellectual property,” said a spokesman for the Korea Franchise Association.

“I think the government is now at a critical turning point in deciding whether a large company’s trademark is the property of the creator or the public,” said a senior public relations manager of a large franchise. “I think the outcome of the ongoing [franchise owner] trials will have huge implications for conglomerates like Samsung, which has also come under fire for receiving huge sums from subsidiaries in trademark royalty payments.”