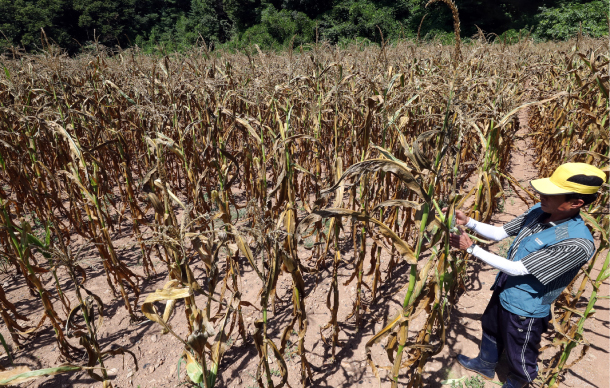 A farmer in Hongcheon County, Gangwon, shows his dried-up corn fields on Sunday afternoon ahead of the harvest season amid Korea’s ongoing heat wave, which has affected crops across the country. [YONHAP]

Korean farmers say this summer’s relentless heat is damaging their crops to an unprecedented degree.

“I’ve been in the apple orchard business for 40 years, yet I have never seen it this bad before,” said Mr. Jang, a 71-year-old farmer, on Wednesday. “Look at this apple. It should have reddened by now, but it’s still yellow and burned.”

Jang runs a 1,000-tree orchard in Uiseong County, North Gyeongsang. Each tree appeared to have around two to three apples that were ruined in the heat, and many more were scattered on the ground when a reporter visited the orchard on Wednesday.

“At this rate, there will no apples that are the proper size to place on the jesa table,” Jang said. Jesa is an ancestral ritual that involves preparing a feast table to honor family ancestors. Chuseok, the Korean harvest festival, which usually falls during the last week of September or first week of October, is one of the national holidays when families practice the ritual. A seasonal fruit is usually placed on the table, and in fall apples are the obvious choice.

“The apples’ growth was stunted by the heat wave,” said Kim Bong-ho, a 61-year-old apple farmer in Uiseong. “They are so much smaller than the ones harvested last year. It’s terribly worrying.”

The North Gyeongsang provincial government said 1,143.5 hectares of crops were ruined by the heat wave this summer. Of them, 734.4 hectares were fruit orchards and fields, and of those 510.1 hectares were apple-growing orchards.

Throughout the country, 2,909 hectares of crops and fruits failed as of last Thursday, according to the Prime Minister’s Office.

Price hikes are already visible on the market. According to the Korea Agro-Fisheries & Food Trade Corporation, the wholesale price of 10 kilograms (22 pounds) of apples was 33,394 won ($29.58) on Aug. 13, which is about 30 percent higher than this time last year.

The Prime Minister’s Office said on Thursday that the central government established agricultural aid packages worth 7.8 billion won for watering crops; 2.4 billion won for tree care in orchards and vineyards; and 6.9 billion won for installing cooling devices for livestock.

The North Gyeongsang provincial government also supported farmers with 600 million won to prevent crop failure due to the heat wave and is set to deliver a 1.6 billion won aid package for September.

An amendment to the Countermeasures against Natural Disaster Act that would designate heat waves as natural disasters has been submitted to the National Assembly. If passed, the amendment would allow the government to compensate farmers for livestock deaths or crop failures due to the heat wave. People who fell ill and the families of those who died due to the heat would also receive compensation.

From May 20 to Aug. 13, 3,977 people got sick from the heat and an additional 48 died from heat-related illnesses, according to the Korea Centers for Disease Control and Prevention.