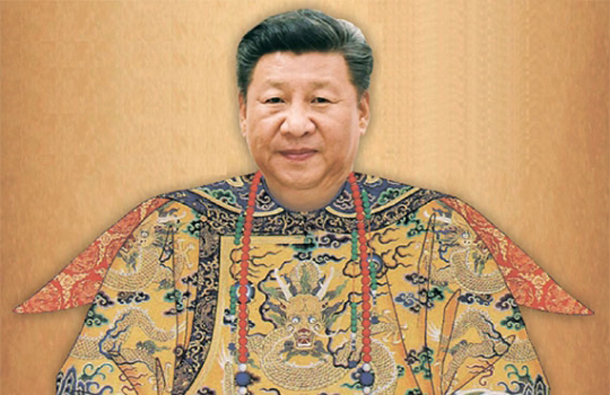 At the Great Hall of the People on March 26, 2018, Chinese President Xi Jinping and First Lady Peng Liyuan welcomed Kim Jong-il’s son Jong-un and his wife. At the dinner, they reportedly watched a documentary about Kim Jong-il’s China visit 35 years ago. Xi described the China-North Korea relationship as “the only friendship built on blood in the world,” “as close as the lips and teeth,” and “sharing a common destiny.” It was a symbolic event acknowledging the third generation of leadership in North Korea and restoring relations that had grown distant.

The process to idolize Xi Zhoungxun, who died in 2002, is under way. The memorial in Fuping County, Shaanxi, where the Xi family came from, has been expanded to a size equivalent to 40 football fields and various memorial goods, such as stamps, are produced. At an exhibition celebrating the 40th anniversary of reform, a gigantic picture of Xi Zhoungxun explaining economic reform to Deng Xiaoping is on display. Xi is described as a revolutionary who helped Mao Zedong complete the socialist revolution and the visionary who drew the blueprint of reform for Deng Xiaoping.

It is no exaggeration to say that this is a part of Xi Jinping’s project of creating a dynasty, following the elimination of presidential terms. Today, China has reverted to the Xinhai Revolution of 1911, which ended the 2000-year-long imperial dynasty and established the Republic of China.

There are people trying to put the brakes on Emperor Xi’s ascent. Resistance over personal worship and lifetime leadership can be heard on the streets and in the universities. A former professor criticized the government policy before being dragged out by security police during a live interview. At the latest Beidaihe meeting, senior watchers raised concerns over Xi ending the “hide your strength, bide your time” strategy too early and triggering attacks from the United States.

There are talks of Xi Jinping visiting North Korea for the Sept. 9 celebration of the 70th anniversary of the North Korean regime. The blood brotherhood will try to push the United States out of Northeast Asia in the denuclearization talks. South Korea is stuck between two tyrannic powers going against the time.