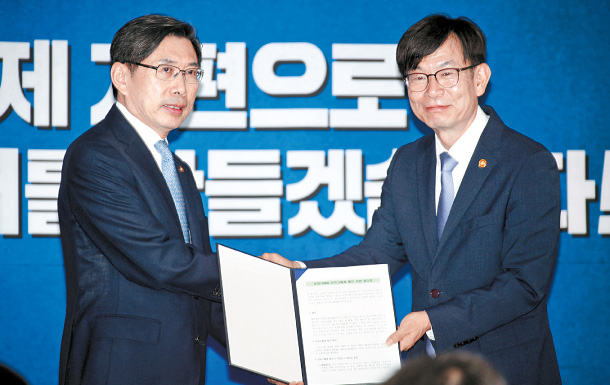 Korea’s antitrust regulator will no longer hold the exclusive right to file complaints in antitrust cases if a proposed change to the country’s Fair Trade Act is enacted.

The change is expected to put private companies under greater scrutiny from the authorities.

The Fair Trade Commission (FTC) and the Ministry of Justice announced on Tuesday that they plan to abolish the rule that gives the commission the sole authority to send serious violations of competition law to courts through prosecutors as part of changes to the Fair Trade Act.

The change requires approval from the National Assembly and would go into effect next year.

Korean prosecutors currently cannot autonomously launch an investigation into an antitrust case without a referral from the FTC. The rule was created in 1980 and was intended to limit the number of competition-related lawsuits filed against companies.

“[We decided to abolish the rule after] it was suggested that the rule undermines the rights of the public and consumers, due to the FTC’s monopoly on the right of referral,” said Kim Sang-jo, chairman of the antitrust watchdog, in a press briefing Tuesday at the Seoul government complex.

The chairman added that the FTC and the Justice Ministry decided to remove the right just for “hard-core cartel” cases such as price rigging, limiting supplies, market division and bid colluding, which require more draconian penalties.

“For such hard-core cases, prosecutors will be able to launch investigations without a referral from the FTC,” said Justice Minister Park Sang-ki.

The watchdog and the Justice Ministry began their discussion on the matter in May this year before coming to an agreement on Aug. 14.

“Both sides shared similar views on abolishing the rule,” said an official from the FTC. “However, the two organizations had to undergo intensive discussions on what to do with the leniency policy.”

The cartel leniency policy refers to a system where the watchdog provides total or partial immunity from punishment to a member of a cartel that reports the group to the FTC.

The concern was that if the FTC no longer has exclusive rights over cartel cases, whistleblowers may become subject to penalties from prosecutors as well despite receiving immunity from the commission, dissuading them from coming forward.

“In the final agreement, the two organizations decided that administration immunity should be given by the FTC and criminal immunity by the prosecutors. They decided to share all the information given through voluntarily reporting to each other,” the official said.

“Leniency policy is a helpful tool for exposing hard-core cartel conduct that takes place clandestinely,” the FTC chairman said. “We have agreed to make a law that gives any employees of a company in a cartel that cooperates with an investigation criminal immunity as well.”

The decision announced Tuesday would put private companies under tighter monitoring than before now that the prosecutors would autonomously initiate investigations on them on antitrust charges. Some worry that this change would infringe on the autonomy of the market. Local businesses have protested that giving the right of investigation in antitrust cases to prosecutors, who do not specialize in fair trade like the FTC, would increase market uncertainties for companies.

“We are well aware of the possible side effects, such as degradation of autonomy of the market and companies’ activities,” said the Justice minister. “The prosecutors will prioritize the cases that are seen as causing tremendous damage to the public economy and will exercise the right of punishment in an appropriate and logical manner.”