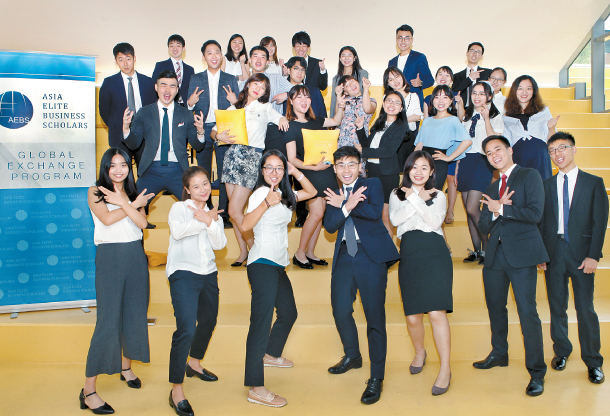 From Aug. 7 to 11, participating students had a chance to visit entertainment companies CJ ENM and SM Entertainment - birthplaces of some of Korea’s most famous TV shows and K-pop groups. They were then taken on a tour around the buildings and taught about some of the companies’ core business activities.

“I was impressed by the fun and interactive environment of CJ ENM, especially its games center,” said Ayato, a sophomore studying management at the University of Tokyo. “Talking to business scholars from different Asian countries also broadened my perspective.”

“It was insightful to learn about the Korean working culture and environment through this rare opportunity,” said Jonathan, a senior majoring in mechanical engineering at the National University of Singapore. “Though Korea is similar to Singapore, I was surprised by the Koreans’ deep respect for seniority.”

The students also received a private tour of the newly-built KB Rockstar Youth Lounge in Hongdae, one of Seoul’s hottest cultural hubs. The JoongAng Daily tagged along on the group’s tour of the lounge on Aug. 9.

The youth center, which opened on April 27, is a four-story building with a rooftop that is equipped with books, board games and a virtual-reality experience zone. The center, which has multiple seminar rooms and stage areas, also hosts creative classes like punk design and cocktail classes as well as public lectures on how to find love and become more sociable.

“The Youth Lounge was co-created by KB Kookmin Bank and Hongik University’s architecture professors,” explained one of the managers of the youth center. “Even though we call it a youth lounge, we didn’t put any upper-age limit for visitors as all are young at heart.”

All visitors can currently use these amenities for free until September, when entry will be restricted to users of KB’s online banking service KB Star Banking or Liiv Mate who are 14 years or older.

“We hope that the students can realize that economics and finance don’t have to be something that’s cold and unapproachable,” said Kim Jin-young, who manages brand strategy at KB Kookmin Bank. “These students will grow up to be business leaders in their countries, and we want to emphasize the important role that companies have in improving people’s lives.”

Students from Seoul National University previously hosted the sixth Global Exchange Program in 2016 under the theme of the disruption of financial technology. The students that year had the opportunity to visit the Samsung Innovation Museum, which showcases the history of the conglomerate’s key inventions, as well as the Bank of Korea.