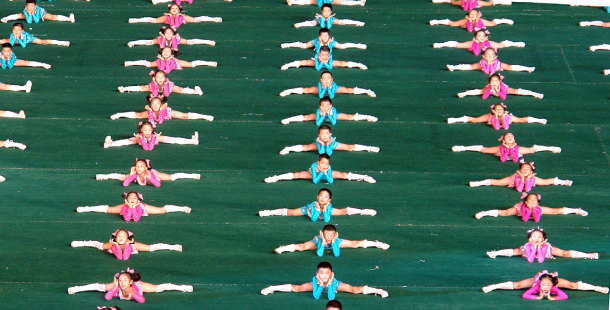 Hundreds of children as young as 6 years old perform in a mass gymnastics show in 2008 in Pyongyang to celebrate the 60th anniversary of the founding of the North Korean state. [JEONG YONG-SOO]

North Korea will not use young children in a planned mass gymnastics performance next month in Pyongyang, a local source with knowledge of the preparations told the JoongAng Ilbo on Monday. Experts believe that the move may be a response to the international community’s condemnation of the show’s rigorous training as child abuse.

At issue is “The Glorious Country,” which the North Korean government has recently promoted through its official English tourism website as a mixture of “grand mass gymnastics and artistic performance.” This year will mark the first performance since 2013. The show will run from Sept. 9, when the North commemorates the 70th anniversary of its founding, through the end of that month at May Day Stadium in Pyongyang.

Tickets for the show are currently being sold from 100 euros to 800 euros ($114 to $912), according to the DPR Korea Tour website, run by the North’s National Tourism Administration. Tourism is exempt from international sanctions.

North Korea has a long history of putting on extravagant gymnastics performances in the fall. The country’s well-trained and highly disciplined gymnasts and dancers, many of them schoolchildren, move in perfectly synchronized forms in front of tens of thousands of audience members, including some from abroad.

In the backdrop of the gymnastics show, tens of thousands of other children flip through colorful placards to create a series of mosaic images and propaganda slogans pledging allegiance to the government. The show, which is also known as the Arirang Mass Games, is meant to instill discipline and collectivism in North Korean schoolchildren while impressing the outside world with its socialist virtues.

“The mass games began in 2002 and were sporadically held up until 2013, and deployed children as young as kindergarteners,” said the local source, who spoke on the condition of anonymity. “But this year, I heard only teenagers will participate.” The show is expected to be held around 20 times next month.

North Korea used to ignore the international community and stick with “our way,” said Jeon Hyun-joon, the vice chairman of the board of directors at the Korea Peace Forum. That changed when Kim Jong-un rose to power in December 2011, and Pyongyang has since grown more aware of its reputation, especially with criticism from abroad, Jeon added.

When Madeleine Albright visited the North in October 2000 as U.S. secretary of state, she was invited to the mass games and was shown a card-flipping scene that depicted a ballistic missile hitting a target. When a JoongAng Ilbo reporter attended a show in 2008, he was told that around 100,000 people were deployed for the program, including hundreds of children as young as 6 years old, who dotted the field and performed splits and handstands.

“They’re from Pyongyang and practice for several months,” the reporter was told by a North Korean official.