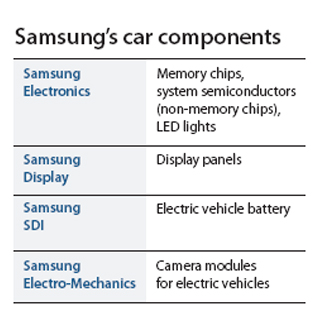 Samsung Electronics sent out an unusual message to its employees on Tuesday through its intranet network Samsung Live.

“There are no plans whatsoever to launch a business or conduct an M&A in companies relevant to making cars, whether those are electric or self-driving vehicles. We will continue pursuing businesses in the component sector with a focus on semiconductors,” read the message.

The statement immediately reached the headlines of local media outlets on the same day. What surprised them was the assertiveness of the denial, especially as rumors about a Samsung plan to acquire automotive manufacturing businesses were not particularly widespread. The response was an unconventional move from the local electronics giant, which usually barely reacts to industry gossip.

Rumors that Samsung may be looking into automotive manufacturing came up on multiple occasions in the past, but this is the first time that it preemptively drew a line in the sand to fight back against such claims.

What fueled the rumors this time was the company’s massive plan to invest 180 trillion won ($161 billion) on new businesses, which it revealed earlier this month. A total of 25 trillion won from the budget was dedicated to developing four business sectors that Samsung counted as their main growth engines for the future: artificial intelligence, 5G, biotechnology and electric car components. Some experts linked the car component sector to Samsung’s possible intention to pursue an M&A with a car company.

The conglomerate does have a history in cars. Under the lead of Samsung Group Chairman Lee Kun-hee, Samsung Motors was established in 1994. Its first model, the SM5, came out in 1998, but the company was sold to Renault two years later amid the Asian financial crisis. This marked Samsung’s exit from automobile manufacturing, but even after that, rumors came out from to time about the conglomerate re-entering the market.

One factor that fed such speculation was Vice President Lee Jae-yong’s position on the external board member of Exor, the Italian holding company that controls Fiat Chrysler Automobiles, which lasted for five years, up until 2017. Another event that fueled such rumors was Samsung Electronics’ $8-billion acquisition of Harman in 2016, a leading U.S. company in electric car components.

As the era of autonomous cars and electric vehicles (EV) nears, the presence of electronics companies in the car business is getting bigger than ever. A common saying in the Korean business scene is that Samsung can make everything for a car except the frame.

A source at Samsung Electronics explained that the company’s announcement was “in consideration of global carmakers, a major client base.” It added that the judgment was made by top executives, as they believed that letting the rumor spread may push away global carmakers and affect its semiconductor and component business.

The action can also be explained by examining market conditions. An ongoing trend in the global high-tech car industry is component companies and carmakers forming alliances. The autonomous car industry is largely divided into two leagues led by Intel and Nvidia. Nvidia is working closely with Tesla, Volkswagen, Mercedes-Benz, Volvo, Bosch and Toyota, while on Intel’s side are BMW and Fiat-Chrysler.

“In the future car industry, an essential task [for component manufacturers] is to maintain cooperation and alliances with carmakers,” said Lee Ho-geun, a professor of automotive engineering at Daeduk University. “It’s likely that Samsung Electronics concluded that rumors over making cars would be an obstacle to this.”

Last year, Samsung Electronics was accepted as a member of the 5G Automotive Association, a global organization of automotive, technology and telecommunications companies, to develop connected cars. Audi, BMW, Ford, Jaguar Land Rover and Daimler are among other 40 firms on this list.