Take a deep breath and relax at Coco Capitan exhibit

Take a deep breath and relax at Coco Capitan exhibit 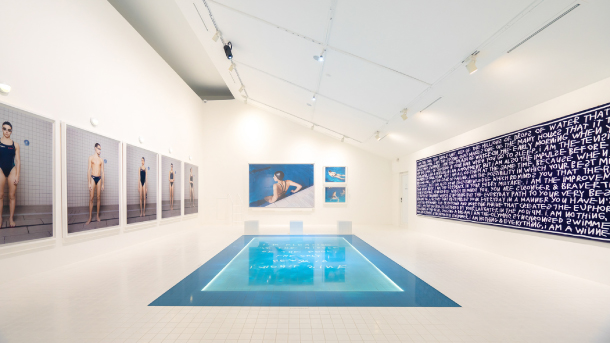 The final section of Coco Capitan’s “Is It Tomorrow Yet?” exhibition held at the Daelim Museum in central Seoul looks like a mini indoor swimming pool. The pool is a digital image of clear blue water and is surrounded by photographs of the Spanish synchronized swimming team before and during their practice. [DAELIM MUSEUM]

Time flies when you’re having fun, so the saying goes. But when you’re not, then waiting can almost be painful, especially when you don’t know when your boredom is going end. For 26-year-old British artist Coco Capitan, art is a way to express herself while waiting for another day to come, but sometimes it’s a chance for her to question the things that she sees in her everyday life.

“Is It Tomorrow Yet?” is the title of an exhibition now being held at the Daelim Museum in central Seoul which will run until Jan. 27 next year. On display are some 150 works of various mediums, including her collaboration with luxury brand Gucci, which brought her immense popularity last year.

“Many people, including myself, spend time worrying about things that have not happened,” said Capitan to local press at the opening day of the exhibition on Aug. 1. “‘Before I die, I want to live.’ It’s just as simple as that. I am going to die one day, and it is not necessarily a negative thing. I will enjoy time with people I love and do as much as I can do while I live. It is really important to be aware of the finitude of life and I tried to create reminders to myself.”

Coco Capitan’s photographs look like fashion editorials, but they focus on the people more than the products. At top is “Boy in Socks” (2017) and “Hasta La Vista” (2015) on display. [DAELIM MUSEUM]

The exhibition mostly features photographs and paintings, with hand-written messages on many of them with messages about ordinary life. “I’m sorry I’m feeling blue cause today I’ve disappointed you” is the message on “I’m Sorry I am Blue” (2018), while two untitled works show a contrast of what the young artist heard from her nagging mother versus the things she wished she had heard, such as “You will learn one day you cannot do anything” and “Do you want mama to fry you an egg? Let mama do it for you.”

Her photographs, which look like editorials from fashion magazines, similarly capture moments of everyday life but pass by without thinking too deeply. Capitan, who studied photography in graduate school, focuses on people instead of objects, which is the case for many fashion and commercial photographs, according to curator Lee Jung-yeol of the Daelim Museum.

“Her photographs carry the subtle changes we get in our lives, almost like a second puberty,” said Lee. “Her works show the emotions of the people that she shoots, and the thoughts she has while photographing them. People in their 20s worry about things and live with anxiety. Rather than giving them an answer to their questions, Capitan captures those worries and says, ‘It’s okay.’”

The highlight of the exhibition is placed at the end, on the fourth floor of the museum. The space has been turned into a swimming pool without any water, with photographs of members of the Spanish Olympic synchronized swimming team before and during their practice sessions. “Here, you feel a sense of relaxation, and get the energy to live tomorrow,” explained curator Lee.

Tickets cost 8,000 won ($7.16) for adults. The museum is open Tuesday through Sunday, from 10 a.m. to 6 p.m. Get off at Gyeongbokgung Station, line No. 3, exit 3, and walk five minutes. For more information, visit www.daelimmuseum.org.