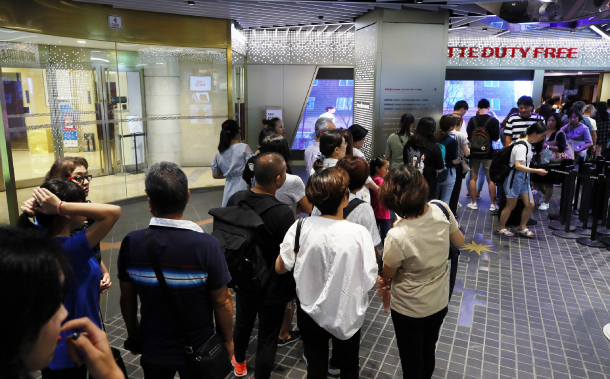 Chinese tourists line up at the entrance of Lotte Department Store’s duty-free shop in central Seoul on Friday. [YONHAP]

Duty-free sales for the month reached $1.34 billion, up from $983 million in July 2017, according to the Korea Duty Free Shops Association. Among the sales, $1.03 billion were by foreigners.

The average purchase per foreign shopper was $694, 5.6 times more than that of locals.

The uptick in business performance comes from private Chinese vendors, according to watchers.

China, whose visitors to Korea had virtually sustained the industry in the past, has yet to completely free state restrictions on group travel to the neighboring country. Private vendors who sell their duty-free purchases to consumers back home have replaced package travelers, watchers said.

Despite July’s gain, duty-free sales declined for the fourth consecutive month in July after peaking at $1.56 billion in March.

“We expect the duty-free business to improve more if Chinese visitors come in large groups during China’s golden week holiday from the National Day to the Mid-Autumn Festival,” an association official said.