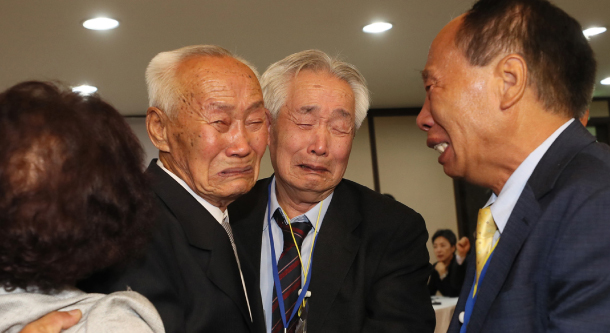 Jo Dok-yong, 88, second from left, breaks down in tears as he meets his South Korean brother, Cho Sang-yong, 80, third from left, and son, Cho Jeong-gi, 67, far right, for the first time since the 1950-53 Korean War on Friday. They met at the Mount Kumgang resort in North Korea’s Kangwon Province. [JOINT PRESS CORPS]

The second inter-Korean reunions this week kicked off on Friday as planned after Typhoon Soulik left Korea without affecting the Mount Kumgang resort, just north of the border separating the two countries.

A total of 326 South Koreans from 81 families crossed the border Friday morning with a large delegation from the South that included journalists, government officials and support staff from the Korean Red Cross. The delegation traveled North on a road connecting both Koreas along the east coast. The group arrived at Hanwha Resort in Sokcho, Gangwon, just south of the border, Thursday afternoon to register for the reunions and receive basic education on visiting the North.

The oldest South Korean is 100-year-old Kang Jeong-ok from Jeju Island, who will meet her 85-year-old younger sister Gang Jong-hwa.

For the second round of reunions, which runs through Sunday, 81 North Koreans who were chosen by the Pyongyang government will meet their South Korean relatives for the first time since the 1950-53 Korean War. South Korea’s Unification Ministry, which handles relations with the North, said the North Korean participants will mostly be accompanied by their sons or daughters as they spend 12 hours with their South Korean relatives in six private and group meetings.

The first reunion this week ran from Monday through Wednesday at the same venue. Eighty-nine South Koreans were selected by the government to meet 185 of their North Korean relatives. The second reunion is expected to follow a similar schedule.

“We were really worried about the typhoon from the day before yesterday and were thinking that we had to come up with a plan B or C,” said Chun. “It’s such a relief the group can leave as scheduled.”

Chun said that he hoped the family meetings will lay the groundwork for regularly-scheduled reunions and exchanges of letters between families. He also stressed that the governments of both Koreas should cooperate to carry out an all-out survey to check whether war-torn family members are alive.

Cho Jeong-gi, 67, and his North Korean father, Jo Dok-yong, 88, were the only parent and child to meet at the second reunion.

Kang Jeong-ok, the 100-year-old from Jeju Island, burst into tears as she embraced her North Korean sister, Gang Jong-hwa.