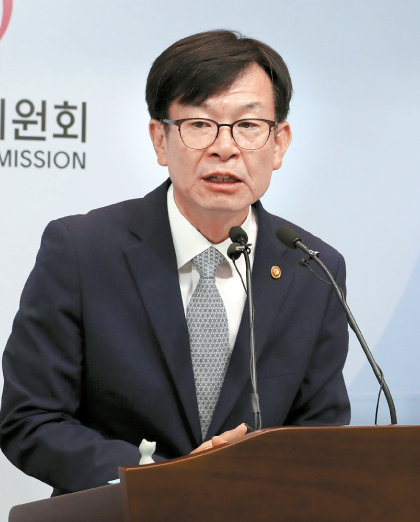 The Fair Trade Commission (FTC) introduced sweeping reforms on Sunday that would stiffen penalties for unfair trading among affiliates of business groups.

They would also diffuse the commission’s own exclusive right to conduct antitrust investigations.

Presently, if a family that controls a big business group holds a 30 percent share or more of a listed unit or 20 percent or more of an unlisted unit, intra-group transactions between affiliated companies become the subject of greater scrutiny and punishment.

The FTC will lower the rate to 20 percent for both listed and non-listed companies to put more affiliates under watch.

The number of regulated units will increase to 607 from a current 231 after the reform. Some of the biggest companies added to the list include Samsung Life Insurance, Shinsegae International, GS Engineering & Construction, Innocean Worldwide and Hyundai Glovis.

The maximum ceiling for the fines for unfair trading and price fixing will double.

“[The FTC] has thought of sustainable growth and tried to reflect that direction in the proposal,” said Kim Sang-jo, chief of the FTC.

“We will take into account different voices from interested parties, experts and the public during a deliberation period,” he said.

The agency will canvass opinions through October and take its proposal to the National Assembly in November.

The amendment will also prevent conglomerates from using their charity foundations to increase the influence of controlling family members by limiting voting rights held by the foundations of large conglomerates.

The maximum voting rights that a chaebol-owned non-profit foundation can use with a group affiliate stands at 30 percent, which will be reduced to 15 percent.

The FTC said it will take a gradual approach toward implementation of the new rules, considering the likely impact on large companies. The ceiling for the voting rights will gradually drop to 25 percent next year and 20 percent in 2020. The 15-percent cap will be enforced in 2021.

The agency also changed the standard by which it selects companies for a ban on cross-holdings in stock ownership.

So far, any company with more than 10 trillion won ($9 billion) in capital comes under the regulation, but the criteria will change to any company whose capital surpasses 0.5 percent of the country’s annual nominal gross domestic product (GDP). This means target companies could change depending on the size of the GDP.

But again, the new rule won’t apply right away. The changed standard will apply at a time when 0.5 percent of the nominal gross domestic product will reach 10 trillion won.

Based on the 2017 figures, 0.5 percent of GDP stood at 8.7 trillion won, and the FTC believes the time for the reformed rule will be sometime around 2023.

Along with the toughened penalties, the reforms will also abolish the rule that gives the commission sole authority to send serious violations of competition law to courts through prosecutors as part of changes to the Fair Trade Act.