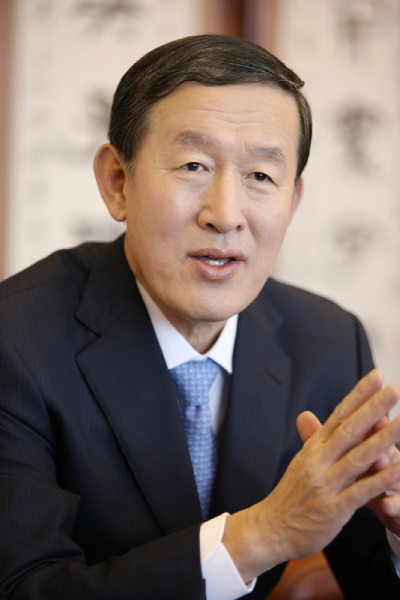 GS Group announced Sunday it will invest 20 trillion won ($17.9 billion) and hire 21,000 more workers in the next five years.

Korea’s seventh-largest conglomerate is following in the footsteps of other leading business groups that recently came up with investment and job creation plans including Samsung, Hyundai Motor, SK, LG, Hanwha and Shinsegae. The Moon Jae-in administration had asked the chaebol to help revive the faltering economy by announcing hefty investment plans.

GS’s average annual investment of 4 trillion won is about 25 percent more than the average for the past three years, which was 3.2 trillion won.

“We have decided to invest 20 trillion won and employ 21,000 more workers in the coming five years to secure sustainable growth fundamentals, strengthen competitiveness in our core business, join pan-national efforts for innovative growth and perform the role of a corporate citizen that gives hope to society,” said GS in a statement.

Executives from GS subsidiaries gathered for a two-day strategy meeting at a resort in Chuncheon, Gangwon from Friday. At the meeting, Huh said the group should continue creating future growth drivers through “incessant challenges and bold investment.”

The chairman, who is also chairman of the Federation of Korean Industries, which represented Korea’s top business groups prior to its involvement in the corruption scandals that drove former President Park Geun-hye from office, also described the qualities executives will need to find business opportunities amidst crisis situations. The qualities include the ability to detect change, the courage to carry out what’s needed to create future growth drivers, and fostering of human resources that can preemptively cope with change.

Investments will be divided into three core businesses. The biggest portion of 14 trillion won will go to expanding petrochemical facilities of GS Caltex, building an eco-friendly power-generating facility at its existing Yeosu plant in South Jeolla, exploring overseas resources for GS Energy and developing renewable energy for GS EPS and GS E&R.

The group will allocate 4 trillion won to its retail arms: GS Retail and a homeshopping arm of GS Shop. The remaining 2 trillion won will be earmarked for new businesses and social overhead capital businesses for GS Engineering and Construction as well as GS Global. GS Retail, in particular, will spend a large sum on helping the GS25 convenience store chain enter Vietnam and GS Supermarket make forays abroad.

The group said such investments will require its subsidiaries to hire 4,200 workers per year, up about 10 percent from an average 3,800 new hires it saw in the past three years.