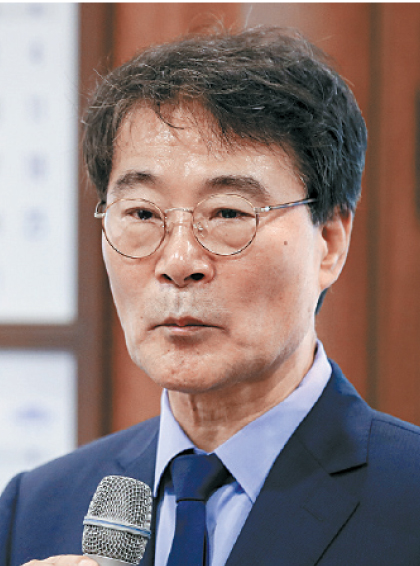 Jang Ha-sung, President Moon Jae-in’s policy director, said Sunday the government will speed up - not put the brakes on - its income-led, innovative growth policy and fair economy initiatives in the second half of this year, claiming that bad recent economic indicators were a sign that the administration should stick to its guns.

“Recent employment and household income figures are a telling sign in a paradoxical way that the government must accelerate the income-growth initiative, not give up on it,” said the former economic professor at a rare press briefing held at the Blue House.

“For the second half of the year, the government will accelerate efforts to more aggressively carry out the policies of income-led, innovative growth and fair economy,” Jang emphasized.

Jang’s undiminished zeal for the income-led economic growth policy comes as small business owners complain that they are being forced out of business by a higher minimum wage, a key component of the policy.

“There were economic figures that show the number of people newly hired has dramatically decreased and income levels among people in the two lowest income brackets have also fallen. As a person responsible for this state of affairs, I wish to convey my apology,” he said.

But Jang said the income-led growth policy wasn’t to be blamed, contending that such disappointing figures paradoxically demonstrated that the government must stay committed to its course.

“There have been criticisms that the recent economic figures on employment and household incomes have gotten worse all because of the increased minimum wage, as if it was responsible for all economic problems we have now,” Jang said. “But the higher minimum wage is just one small part of the whole income-led growth strategy.”

Making his case, the top policy aide said while the country’s economy has grown 90 percent between 2000 and 2017, average household income growth has risen only 32 percent over the same period.

Jang said the Moon government’s economic policy, comprised of income-led, innovative growth and a fairer economy, were “not merely a shift of policy line” but were a “shift of economic paradigm” in a country that relied on supporting large conglomerates and exports, which he said could not be sustained any more.

“It has already been proven that an economic policy that centers on large conglomerates and export-driven economy had exhausted its merits during the compressed economic growth of the past,” he said.

To his critics, he asked, “If not the income-led growth policy, are you saying we should go back to the economic policy of the past?”

Jang’s press briefing on Sunday, the first of its kind since January, was held to quell mounting criticism that the government’s economic agenda, particularly boosting the minimum wage, is slamming the economy by forcing small businesses to stop hiring.

Data by Statistics Korea released last Friday indicated that only 5,000 new jobs were added to the Korean economy in July, plummeting from 106,000 new hires in June, which was already considered an alarmingly low number.

The data also showed that over 200,000 temporary and day-to-day jobs vanished last month.

Critics say the terrible employment figures are directly tied to a 16.4-percent minimum wage increase that went into effect at the onset of the year, elevating it to 7,530 won ($6.76) per hour from 6,470 won last year. It is set to increase 10.9 percent to 8,350 won next year.

Jang’s affirmation of the income-led growth policy came a day after President Moon himself had reaffirmed it in a video message to supporters.

“I say this to my fellow party members with full confidence as president of the Republic of Korea. Our economy policy is [heading] in the right direction,” said the president in a video message broadcast for Democratic Party members gathered at a party convention on Saturday to elect a new party leader.

Calling Moon’s economic drive “playing with fire,” Kim said Moon must put an end to an economic policy that was “destroying the economy and jobs.