These smart cameras can watch and learn

These smart cameras can watch and learn 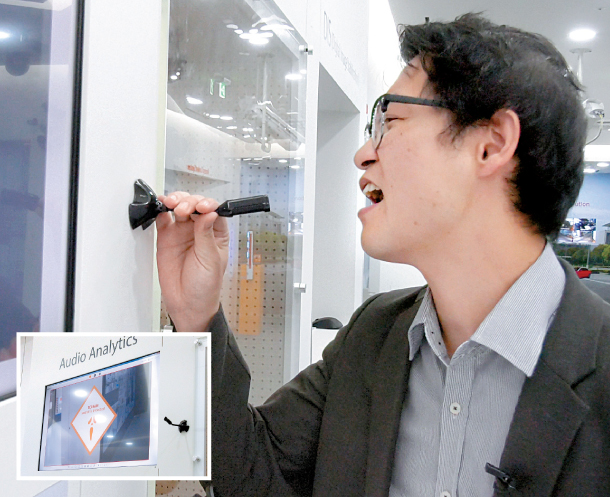 A man screams into a mic at Hanwha Techwin’s Pangyo R&D Center in Seongnam, Gyeonggi. Using its audio analytics capability, the smart camera identifies that a person is screaming and delivers this information to a screen that is connected to the camera through Internet-of-Things technology. [HANWHA TECHWIN]

An elderly man suddenly collapses at home. None of his family members are scheduled to visit him for the next few days. Fortunately, he has a smart home camera system equipped with artificial intelligence installed in his home that detects his unusual behavior and immediately contacts his family members.

Hanwha Techwin’s newest cameras can now detect unusual behavior such as loitering, trespassing and collapsing. Its sound classification ability can also identify gun shots, breaking glass, explosions and screaming. Two of Hanwha’s cameras from the Wisenet X series - the XNO-6080RG and XNP-6371RHG - were certified as intelligent by the Korea Internet & Security Agency earlier this month.

“Our AI CCTV can detect violence anywhere from kindergartens to buses,” said Kim Hyang-eun from Hanwha Techwin’s marketing department. “The CCTV is developed enough to inform guardians or appropriate institutions of unusual patient behavior, like collapsing.”

Technology from AI cameras has progressed far beyond simple face detection. Now, the smartest devices can identify unusual behavior and sounds and alert relative institutions and individuals using Internet-of-Things technology. These cameras are making it possible for people who are facing threats or in medical need to get the attention of police and emergency officials without calling them. 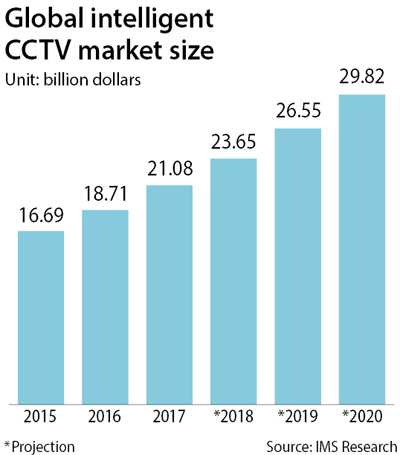 Though the United States is leading the global AI camera market, China is catching up fast. China began its so-called Skynet project in 2004 when it installed 20 million CCTV cameras across the country, sparking global debates on potential privacy infringement. The large quantities of data amassed through the project nonetheless give Chinese CCTV developers a competitive edge on improving surveillance technology.

“Researchers at Hanwha Techwin began developing AI algorithms suited for CCTV three years ago,” said Noh Seung-in, a senior developer of algorithms at Hanwha Techwin. “Because [the cameras] get smarter after learning from more data footage, we expect AI CCTV applications to be expanded into a wider variety of situations soon.”

Despite ongoing concerns about privacy encroachment, experts expect the surveillance camera industry to continue expanding. They point to the wide range of situations where smart cameras will be useful. Market research firm IMS Research also forecasted that the global smart camera market, which was valued at $16.69 billion in 2015, will double in size by 2020 to be worth $29.82 billion.

To appeal to hesitant consumers, surveillance camera manufacturers are also developing surveillance technology that promises to protect the privacy of individuals.

“We are currently developing ‘masking techniques’ which will cover up the identity of individuals who show up in the footage and only extract data analyzing the situation,” explained Noh.