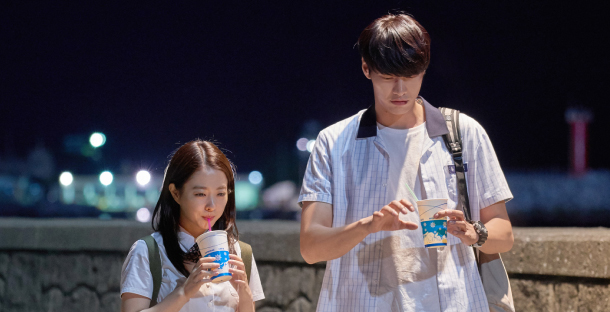 “On Your Wedding Day,” co-starring Park Bo-young, left, and Kim Young-kwang as love interests, debuted at number one in the weekend box office. [MEGABOX PLUS M]

Followed by “On Your Wedding Day” were three Korean films - “The Witness,” “The Spy Gone North” and “Along With the Gods: The Last 49 Days.” They each slid a spot to come in at second, third and fourth, respectively.

From Friday to Sunday, “On Your Wedding Day” sold 694,000 tickets at 962 screens, accounting for 29.7 percent of the entire weekend’s ticket sales. Since its release on Wednesday, the romance tale has sold a total of 901,000 admissions, according to data provided by the Korean Film Council.

In the classic boy-meets-girl romance flick, Park of “A Werewolf Boy” (2012) partners up with model-turned-actor Kim Young-kwang. The movie begins with Wu-yeon (Kim) falling in love at first sight with a transfer student Seung-hee.

She may look vulnerable at first, but Seung-hee is a tough and independent girl, while Wu-yeon is a sloppy, tall student, who yet is strong enough to protect Seung-hee from others at school. But their romance is short-lived, as family issues force Seung-hee to move. The pair meet again when they grow up, but timing is not on their side.

The movie, directed by Lee Seok-geun, may have scenes that audiences have already seen in classic boy-meet-girl flicks like the Taiwanese romance films “You Are the Apple of My Eye” (2011) and “Secret” (2007), but it maintains a down-to-earth tone.

Coming in at second was “The Witness.” The thriller sold 433,000 tickets over the weekend, bringing its two-week total to 2.2 million tickets.

Accounting for 19 percent of the weekend’s ticket sales, the movie, about an average family man (Lee Sung-min) facing a moral dilemma over whether to report a murder after witnessing it, has surpassed its break-even-point of 1.8 million tickets. 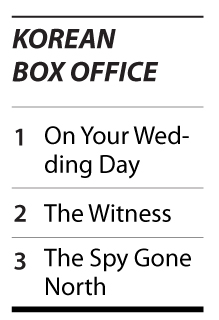 The adaptation of Joo Ho-min’s sensational webtoon of the same title, the latest “Along With the Gods” has sold a total of 11.89 million tickets. The total is just short of the 14.41 million admissions the first film in the series sold. The sequel has managed to become the 13th best-performing film ever released in Korea this weekend, pushing down the 2004 war movie “Taegukgi: Brotherhood of War.”

The musical, “Mamma Mia! Here We Go Again,” was the best-performing foreign flick last weekend, rounding out the top five.

The female-led spy comedy “The Spy Who Dumped Me,” starring Mila Kunis and Kate McKinnon as best friends who unwittingly get entangled in an international conspiracy, debuted at sixth.