DP chairman reaches across the aisle on 1st day

DP chairman reaches across the aisle on 1st day 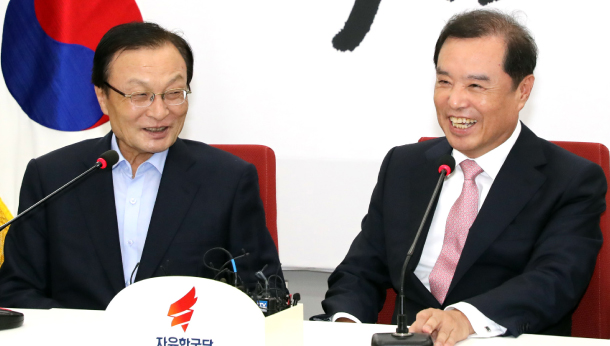 Lee Hae-chan, the newly-elected chairman of the ruling Democratic Party, began his first day as the party’s chief by paying courtesy visits to opposition leaders on Monday.

His meeting with Kim Byung-joon, interim leader of the main opposition Liberty Korea Party, attracted particular interest. Lee and Kim served together during the administration of Roh Moo-hyun, which governed the country from 2003 to 2008.

Lee served as prime minister for the late president Roh between 2004 and 2006 and Kim was Roh’s top policy aide for the same period.

“In my acceptance speech, I proposed holding a meeting with all opposition party leaders with no strings attached,” Lee said as he greeted his former colleague. Kim said that the ruling and opposition parties should work together to improve people’s livelihoods. “We should work to find areas that we can agree on. But in respect to economic policy, our principles are very different,” said Kim.

After exchanging remarks, the two held a meeting that was not open to the press. The two discussed the need for bipartisan spirit on inter-Korean relations and the denuclearization of the Korean Peninsula, according to Hong Ihk-pyo, the DP spokesman, who briefed reporters on the two leaders’ meeting. Kim said he would review Lee’s proposal for a party leaders’ meeting first before making a decision to accept it or not.

Earlier in the day, Lee paid his respects at the graves of former presidents Syngman Rhee and Park Chung Hee at the Seoul National Cemetery. It was a symbolic move that highlighted Lee’s determination to reach across the aisle and appeal to conservatives. The two former presidents are scorned by liberals for their authoritarian rule but are beloved by conservatives.

It was Lee’s first visit to the graves of the two strongmen. He also visited the graves of former presidents Kim Young-sam and Kim Dae-jung.

Lee, a seven-term lawmaker, won the party’s top position Saturday with 42.9 percent of the vote, easily defeating the two other contenders by margins of over 10 percent.

The 66-year-old will steer the DP for the next two years, which means he will dole out the party’s nominations to candidates for the 2020 general elections. During his campaign for the chairmanship, Lee declared that he would not seek another term in the National Assembly in the 2020 election, saying that he would not use his position as party chairman to help his own political career.