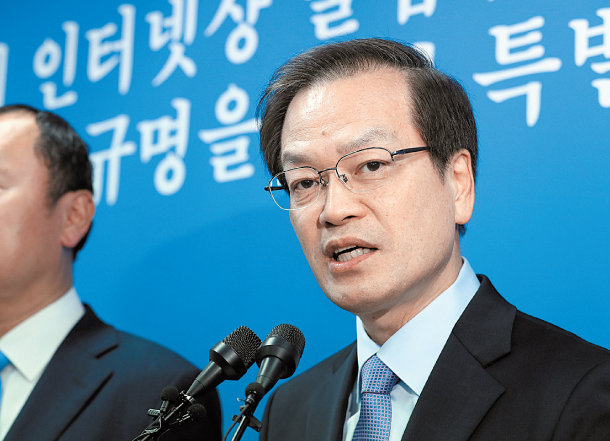 “Gov. Kim [Kyoung-soo] colluded with Druking and his associates to manipulate online opinion through a computer program called King Crab on the behalf of the Democratic Party ahead of the 19th presidential elections from November 2016,” said special counsel Huh Ik-bum at his office in southern Seoul on Monday.

But the counsel added there was no evidence to show Kim had given the group a million won ($899) for its activities.

One day before its mandate expired on Saturday, the special counsel indicted last Friday South Gyeongsang Gov. Kim Kyoung-soo, the well-known political blogger Kim Dong-won - better known by his internet alias Druking - and 10 other associates on the charge of obstructing the business of Naver, Korea’s largest portal site.

Kim Kyoung-soo was also charged with violating elections laws for allegedly having received around 5 million won from Kim Dong-won and his group in September 2017.

Yet little in Monday’s announcement indicated that Huh unearthed decisive evidence against Kim Kyoung-soo or that the opinion rigging campaign had been orchestrated by politicians like Kim in the ruling party.

Instead, Huh’s announcement went over ground already known to the press.

The independent counsel found that Kim Dong-won and his associates had used its opinion manipulation software to generate over 88.4 million “likes” for around 1.19 million comments on around 76,000 news articles posted to Naver from December 2016 to February 2018.

They posted comments on social media that were positive about Moon Jae-in during last year’s presidential elections and artificially inflated the number of “likes” on those comments, said Huh.

Huh added that South Gyeongsang Gov. Kim had violating election laws by promising one of Kim Dong-won’s associates the post of consul general in Sendai, Japan, in exchange for their help in the presidential elections as well as in his gubernatorial campaign last June.

The counsel’s investigators concluded that Gov. Kim Kyoung-soo had given permission to Kim Dong-won and his crew to develop the software based on the governor’s meeting with the group on Nov. 9, 2016, in which they showed him a demonstration of the program.

Huh failed to find evidence of the most serious allegation against Gov. Kim - that he had given a million won to Kim Dong-won - which was part of the blogger’s initial testimony and one of the main reasons for the naming of a special counsel. Huh said this accusation was baseless and was later recanted even by Druking himself.

Moreover, the counsel acknowledged that the approximately 26 million won given to Kim Kyoung-soo by the group from September to November 2016 were valid political donations and not in violation of campaign finance laws.

Huh also said cases against Blue House secretaries Song In-bae, who allegedly first introduced Druking to Kim Kyoung-soo, and Baek Won-woo were out of the counsel’s jurisdiction and would be passed to state prosecutors.

Though the independent counsel’s investigators will continue to pursue their case against the suspects in court, the dearth of evidence they have in order to prove Kim Kyoung-soo permitted the rigging casts an uncertain light on the prosecution’s case.

Few suspected the scandal would become so big when it first came to light on Jan. 31, after the ruling Democratic Party requested an investigation by the police regarding suspected opinion rigging activities through the use of macro software on news articles posted on Naver.

The police traced the activities back to Kim Dong-won and two of his associates, revealing that they had “liked” numerous comments in February critical of the Moon government and its decision to form a joint women’s hockey team with North Korea for the Pyeongchang Winter Olympics.

It was later revealed that Kim Dong-won and his group had turned on the Moon administration after its requests for government sinecures were rejected by the Blue House.

Kim Dong-won was arrested on March 22 on opinion rigging charges, and then news reports surfaced that the two associates were members of the Democratic Party.

Later that month, TV Chosun reported that Kim Kyoung-soo, then a DP lawmaker mulling a run for governor of South Gyeongsang, had exchanged extensive communications with the group.

The political opposition, spearheaded by the conservative Liberty Korea Party, seized upon mounting allegations against Kim to demand a special counsel investigation, even holding legislation hostage to pressure the DP to acquiesce to the probe.

On May 14, the five major parties in the legislature agreed to launch an independent counsel, which was approved by President Moon. Huh Ik-bum, a former prosecutor recommended by opposition parties, was appointed to lead the team.

The probe appeared to make headway in early July, uncovering evidence that the police and regular prosecutors failed to unearth in previous investigations. It obtained a USB drive from Kim Dong-won that contained records showing the governor had consulted him consistently on political issues.

But the counsel soon ran into a brick wall in its attempt to find decisive evidence tying Kim Kyoung-soo to the rigging campaign.

The turning point came when the counsel’s probe of a Druking-associated lawyer ended in tragedy after Rep. Roh Hoe-chan, an influential figure in Korea’s progressive circles, committed suicide on July 23. Roh was accused of receiving money from the lawyer and Kim Dong-won’s group and admitted to this in a suicide note, though he said they received no favors from him.