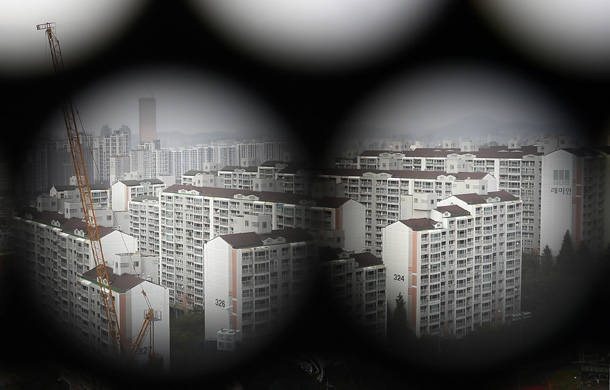 “Real estate prices will go down by 20 to 30 percent to levels below the Oct. 29 measures,” said Kim Yong-min, director of the tax department at the Ministry of Finance and Economy, on May 17, 2006, when he appeared on an MBC radio show. Roh Moo-hyun’s Oct. 29, 2003 measures were Korea’s strongest-yet anti-speculation policy. They introduced the comprehensive real estate tax for the first time.

The Aug. 31 measures in 2005 reinforced the comprehensive real estate tax. However, as demand for real estate dropped, the market became dominated by speculators. Over the five years of the Roh administration, nationwide housing prices increased by 63.58 percent.

Once again, the myth that real estate prices could be lowered returned. Prices rose by 100 million won ($90,171) in a month in many places. Prices went up not just in the Gangnam districts of southern Seoul but also in Gangbuk, Yeouido and Yongsan, which Seoul Mayor Park Won-sun planned to redevelop. Now, people say that housing prices cannot be lowered across all of Seoul, not just Gangnam. Mayor Park was surprised by the sudden hike and put off the development. But it is unlikely that the market will cool down. I have déjà vu from the Roh administration. Real estate prices keep going up when the government tries to control them.

The confusion starts from the fact that the housing price is determined by market supply and demand. People instinctively seek better housing. Blocking the flow of money into housing is like preventing water from flowing. But politicians still meddle with the market to control housing prices.

But the outcome is the opposite. With stronger regulations, such as heavy taxes and loan control, housing becomes more scarce and expensive. In Gangnam, some apartments went up by up to 500 million won, and in Gangbuk, 1 billion-won apartments can now be found. Regulations meant to lower housing prices raised them. The Roh administration learned this lesson already, and it can only be explained by simple supply economy.

The government is once again becoming the boy who cried wolf. While Mayor Park retracted his plan, the demand control measures by the government caused prices to rise. The mayor’s belief that he can control the market brought out the unbeatable real estate myth. As a result, working-class people who postponed buying houses are suffering.

Let’s remember this — no administration has ever defeated the market. The market can only be brought down by economic crisis and high interest rates. Taxes and regulation cannot stabilize housing prices without stable supply. Other attempts to control housing prices make the government look like the boy who cried wolf.