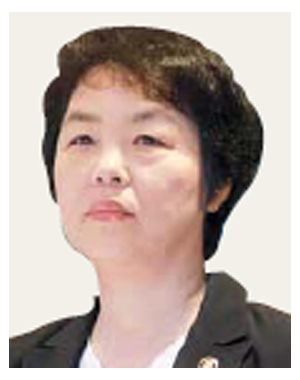 In a tearful swansong, the head of the government’s economic statistics agency Monday slammed the Moon Jae-in administration’s decision to remove her, fueling controversy over the politicization of data as the president’s income-led growth policy stumbles.

“I have worked hard to ensure that statistics are not used as a political tool,” said the outgoing commissioner of Statistics Korea, Hwang Soo-kyeong, in a speech at the government complex in Daejeon.

“As its chief, I have strived to put independence and professionalism at the heart of Statistics Korea,” she continued.

Hwang was replaced along with five other deputy ministers on Sunday ahead of a major cabinet reshuffle that is believed to follow later this month. She served 13 months as head of Statistics Korea - a deputy-minister level position - considerably shorter than the average two years of her predecessors.

After a farewell ceremony through which she was visibly in tears, Hwang told a reporter from Edaily, a local economic news outlet, that she was never one to obediently follow orders from superiors, a comment that has been interpreted as a sign that her dismissal came as a result of conflict between the statistics agency and the presidential office.

There is widespread speculation that the Blue House decision was prompted by a series of unfavorable reports produced by the agency, including one that showed the worst jobs growth in eight and half years and several others describing a widening income gap between the rich and poor.

The blame naturally shifted to the president’s signature income-led growth policy, which includes measures like a minimum wage hike that has been blamed for the poor numbers, as small businesses stopped hiring staff that earn minimum wage.

Opposition parties immediately attacked the decision to fire Hwang, saying the Moon government fired her because recent figures coming out of the agency show the economy to be in trouble.

They stressed that the sacking threatens the independence of the agency.

“The Moon administration is trying to mask the failure of income-led growth by forging false statistics,” said Kim Sung-tae, floor leader of the main opposition Liberty Korea Party. “Firing the statistics chief because of numbers it doesn’t like is persecution.”

A deputy-minister level reshuffle rarely invites attention. But in a case like this, in which the fired deputy minister openly fights back, the Blue House finds itself in more controversy as it defends its economic policies.

Meanwhile, the administration’s choice for Hwang’s successor, Kang Shin-wook, has also been panned by the opposition as unsuitable due to his lack of experience in statistics or the public sector.

A senior researcher at the Korea Institute for Health and Social Affairs, a government think tank that conducts health and social policy research, Kang specializes in income distribution issues and has been accused of being biased in favor of the administration’s minimum wage hike.