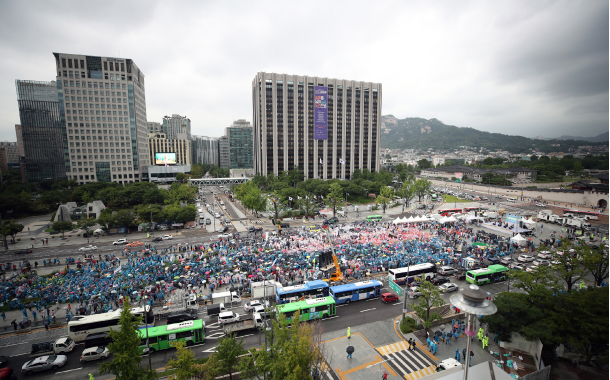 Thousands of self-employed and small business owners took to the streets Thursday to protest the government’s minimum wage policy, shrugging off ameliorative measures announced by the government.

Small business owners and their representatives, including the Korea Federation of Micro Enterprises, held a rally in Gwanghwamun, central Seoul, on Thursday demanding the government backtrack on its plan for another large hike in the minimum wage next year.

“The government is prioritizing the minimum wage [in its economic policy] but even with good intentions, making an irrational move could have adverse effects,” said Jegal Chang-kyun, head of Korea Food Service Industry Association. “The government forces self-employed and small business owners out of work in its attempt to help low-wage earners.”

Some 150 organizations from across the country convened for the demonstration. Lawmakers from opposition parties, including Kim Sung-tae, floor leader of the Liberty Korea Party, and Chung Dong-young, chairman of the minor Party for Democracy and Peace attended the event and criticized the Moon Jae-in administration’s economic policy.

The disgruntled small business owners are asking the government to establish measures that would allow different minimum wage rates depending on industry, geographical location or size of the company.

The Minimum Wage Commission, comprised of representatives selected by the government, companies and unions, decided last July to increase the minimum wage by 10.9 percent to 8,350 won ($7.52) next year, the second year in a row for a double-digit hike. Last year, the commission raised the rate by 16.4 percent to 7,530 won.

The small business owners Thursday claimed the nearly 30 percent increase over two years is threatening their very livelihoods. The demonstration Thursday took place despite the recent measures rolled out by the ruling Democratic Party and the government to help self-employed and small businesses survive the higher minimum wage.

Earlier this month, the ruling party and government decided to earmark as much as 7 trillion won to help these businesses, providing subsidies for them to maintain their staff as well as financial support if they decide to close down stores or businesses and hunt for a job.

Choi Seung-jae, chairman of the Korea Federation of Micro Enterprises, demanded the government create a presidential commission for self-employed and small businesses.

While protests against the government’s minimum wage policy continue, the Moon administration has been relentless about its policy.

Moon himself said on Tuesday during a cabinet meeting that the average monthly income of the wage earners in urban regions has seen a “drastic increase compared to last year,” adding that the policy is seeing results.

“The target and direction [to raise the minimum wage to 10,000 won ultimately] is correct but we need to be more flexible with its pace,” said Finance Minister Kim Dong-yeon on Tuesday during an interview with JTBC.