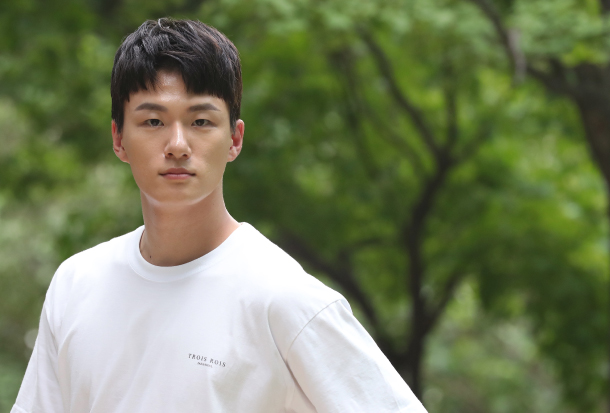 
Gathering in front of the TV to watch dramas and variety shows feels old school to many modern teenagers, who prefer to watch shows online. Web drama “A-Teen,” which releases one episode a week on portal site Naver, has recently exploded in popularity with those in their teens and 20s with its shows that last about 10 minutes.

Actor Shin Seung-ho has received the most attention after appearing on the show. The rookie actor, who has spent less than one year acting, played football for 11 years until he was a sophomore in college. But on the show, he has transformed himself into a basketball player.

Playing a cute character on the show, fans have given him many nicknames to show how much they care for him and how excited they are to see his character smile.

Ilgan Sports, an affiliate of the Korea JoongAng Daily, met with the rookie actor to talk more about his take in the acting world.

Q. What was the experience of shooting your first drama like?

A. The three months have passed by so fast, and I don’t even remember how it ended. I cried during the last day of filming. It was my first work, first leading role, and even though wrapping up the shoot didn’t mean that I wouldn’t get to see these people again, I was still sad. There are some others who cried, but I was the only guy who cried. I got so attached to this work because it is my first. I was so thrilled to play the lead in my first-ever acting job.

How did you start modeling and then acting?

I played football seriously from middle school, but some people asked me to go into modeling. Back then, there was not even a moment for me to consider modeling because I was absolutely sure I would play football.

When I [finally left the football field,] I started to think about what I could do. Then, I opened my heart to the world of modeling. Because I had been an athlete since I was young, I had muscles while most fashion models had slimmer bodies. Then, I was told that my body, my image and my voice would be much more suitable to pursue a career as an actor. So, I started to study acting last fall.

How do you think you were able to make your debut so quickly after deciding to start acting?

I think what I have now is passion. I’m doing something totally different from [what I thought I would be doing], but I don’t regret it at all. I don’t regret that I invested much of my time in football as it has helped me so much, and I believe it will be helpful in the future.

Why do you think that “A-Teen” has exploded in popularity?

I think it’s because the show is very realistic about telling the stories and worries that many high-school students have, such as which career path to choose and how to balance romantic relationships, friendships and family. The show has stories that many can sympathize with.

Is there any particular scene you especially remember?

Although it wasn’t a particularly major scene, I remember my character yelling and crying when he said that he would quit basketball. That scene reminded me of my own experience of deciding to stop pursuing a sports career.

I want to follow in the steps of actor Jo In-sung. I respect him. He did modeling before, and his body image is something I want to have. He has played so many different characters, and his roles have made the work better, so I want to be like him.

Do you have any other goals for this year?

I want to be in TV shows, dramas and movies. I did find a good piece of work, but I don’t think I have accomplished something yet. I have a long way to go. So I want to do as much work as I can and meet as many characters as possible.