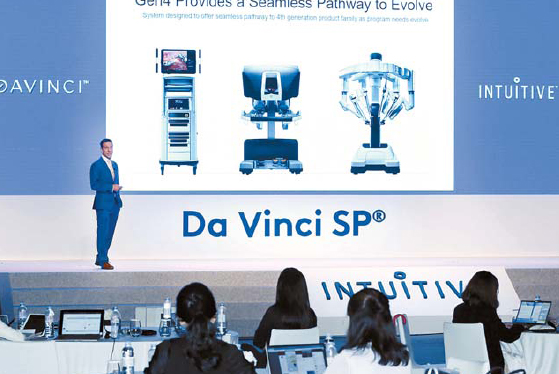 Intuitive Surgical, a leading U.S. robotic surgical system developer, is bringing the company’s new-tech surgical robot to Korea before any other market outside the United States.

Korea has “the world’s best robotic surgeons,” so it is a natural place to bring the technology, according to Glenn Vavoso, senior vice president of global commercial operations and Asia Pacific at Intuitive Surgical, at a press conference in central Seoul on Thursday. “We have been touched and inspired by the creativity of the Korean surgeons,” he said.

The model, which costs 3 billion won ($2.7 million), differs from its predecessors in the fourth-generation surgical robot family, such as X and Xi, in that its surgical cart has a single surgical arm that comes with three multi-jointed instruments that can perform surgical procedures. It also features a 3D high-definition camera.

This allows for deeper and narrower access to tissue in the body through a single, small incision, enabling surgeons to perform more complex procedures, Vavoso said. Previous models had multiple ports, leading to a higher chance of equipment collisions.

The Nasdaq-listed Intuitive Surgical, headquartered in Sunnyvale, California, is a dominant player in the robotic surgery, and has over 80 percent of the global market share.

A surgeon performs a da Vinci procedure every 36 seconds, and over five million surgeries have been conducted since 1995, when the company was established.

Intuitive Surgical has been the sole robotic surgery system provider for the local market ever since the country introduced robotic cholecystectomy surgery to Korea in 2005. By September, more than 100,000 surgeries in Korea will have been performed with a da Vinci system.

However, Meere Company, a local firm, developed the first Korean surgical robot, Revo-i, in March and sold it to a local hospital in August, so competition in the domestic robotic surgery system is set to begin.

The surgical robotics market is rapidly expanding. It is expected to grow 13.5 percent annually to reach $2 billion by 2024, according to GlobalData, a market researcher.