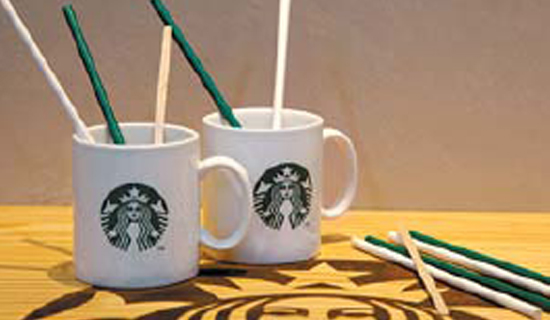 Starbucks will launch trial paper straws at 100 of its stores from Sep. 10 before introducing them nationwide in November. [YONHAP]

Starbucks Korea will begin offering paper straws at 100 of its stores from Sep. 10, the cafe franchise announced Thursday.

Starbucks Korea selected 100 of its most popular cafes in Seoul, Busan and Jeju to test paper straws during a two-month trial period. After analyzing customer feedback and improving straw quality, the cafe chain plans to replace its plastic straws with paper ones in all stores across the country from November.

Out of the five straw types that Starbucks currently provides, only the common plastic ones offered with “Tall” sized iced drinks will be replaced with paper straws. Starbucks’ paper straws have been certified as safe by the U.S. Food and Drug Administration and Korean food safety regulators.

Starbucks will offer green paper straws during the first two weeks of the paper straw launch, and white ones in the following two weeks. It will offer both colors simultaneously throughout the rest of the trial period to assess customer preferences. From November, the cafe chain will only offer straws in whichever color appears to be more popular during the trial period.

“Korea will become the second country after the United Kingdom where the local Starbucks office introduces paper straws,” said a Starbucks Korea spokesman.

The proposed paper straw adoption comes nearly two months after Starbucks in the United States announced that it would introduce a series of eco-friendly changes to completely eradicate plastic straws from its stores across the globe by 2020.

“Because paper degrades at a much faster rate than plastic,” added the Starbucks Korea spokesman, “we expect the paper straw initiative to be beneficial for the environment.”

Starbucks Korea is one of 21 cafe and fast food franchises in Korea that made a voluntary agreement with the Ministry of Environment in May to reduce waste. Since the agreement, the mega franchise has been carrying out various green initiatives like sending electronic receipts to customers who have downloaded the Starbucks app.

Starbucks also plans to replace plastic coffee stirrers with wooden ones and introduce plastic cup lids that don’t require straws by the end of this year.