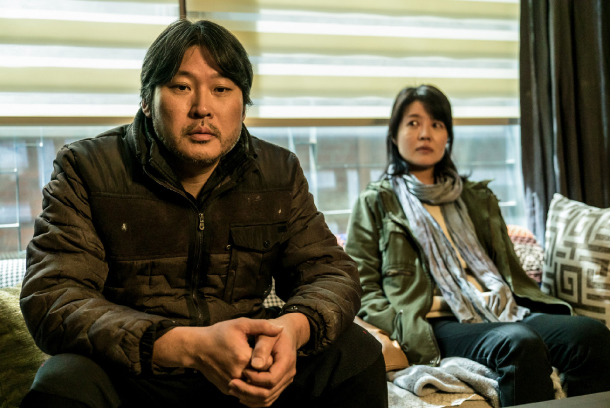 Director Shin Dong-seok’s first feature “Last Child” is a melancholic film that manages to restrain itself from being too sentimental despite its terribly sad plot involving parents who lose their only son in an accident.

Screened at the Berlin International Film Festival in February, the film deals with the death of a high school student, and how the incident changes the lives of the boy’s parents, who each grieve in a different way.

The film delicately shows the altering psychological states of the dead boy’s mother Mi-suk (Kim Yeo-jin) and her husband (Choi Moo-sung), who is called CEO Jin, as they gradually learn the truth behind the death of their son, Eun-chan.

The star of this movie is Ki-hyeon (Sung Yu-bin), a classmate of Eun-chan’s. He is the person that Eun-chan sacrificed his life for while he was drowning during their trip to a valley with classmates. At least, that is what Eun-chan’s parents are told.

The movie begins after the death of Eun-chan. While his father tries to overcome his grief by returning to his business, his wife struggles to accept the death and attempts to connect with his son by meeting Eun-chan’s closest friend, which usually ends very uncomfortably.

But things start to pick up when Jin approaches Ki-hyeon, who has been abandoned by his parents, and barely makes ends meet by delivering fried chicken. Instead of blaming Ki-hyeon for the death of his son, Jin embraces the vulnerable boy. Though Ki-hyeon initially rejects Jin’s kindness, the boy gradually opens up to Jin, who teaches him interior design skills and offers him a job to work for his small company.

Unlike Jin, Mi-suk initially is very cold towards Ki-hyeon, but gradually opens up to him and treats him like the son she had lost by taking him out on a picnic and taking selfies with him. Though enlightened by the new life that seems to lie ahead of him thanks to the help of Eun-chan’s parents, their benevolence intensifies the sense of guilt Ki-hyeon feels about what actually happened to Eun-chan on the day he died.

When the guilt finally makes Ki-hyeon spill the truth, Mi-suk and Mr. Jin are left in utter desperation. The director tries to carefully capture the frantic emotions of the couple, which he takes a little too far.

But despite the over-the-top ending that also seems a little too abrupt, the filmmaker succeeds in delving into the topics of forgiveness and guilt, which could be so strong that those who have survived hope for their own death.