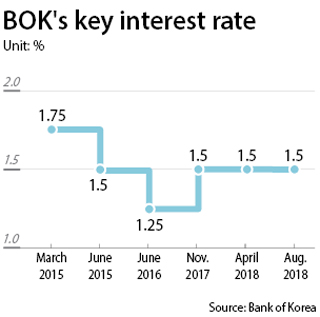 Korea’s central bank kept its key interest rate unchanged on Friday as it is worried about weakening economic indicators for the job market, consumer sentiment and household incomes.

The Bank of Korea (BOK) has kept the benchmark interest rate at 1.5 percent for nine consecutive months, suggesting a slower than expected trajectory for future rate hikes.

Gov. Lee Ju-yeol underlined “increased uncertainties” at home and abroad but said the country is on the right track for meeting its potential growth rate.

“It is true that more uncertainties exist compared to July when [the Bank of Korea] provided an economic outlook, but Korea will maintain a potential growth rate [of 2.8 percent to 2.9 percent],” the governor said during a press brief after a rate-setting meeting with monetary policy committee members.

Friday’s decision was not unanimous since Lee Il-houng, a board member, voted to raise the key interest rate.

The economist was also the sole dissenter in the July meeting.

The central bank lifted the benchmark interest rate last November for the first time in more than six years, and the governor has hinted at more hikes should the economy show signs of sound growth.

The deteriorating jobs condition, however, is considered a major downside risk.

Given that the average number of newly-added jobs in 2016 and 2017 was above 290,000, the miniscule increase sent shock waves across both the economic and political realms of Korea.

The index for consumer sentiment hit a 17-month low in August while business sentiment dipped to an 18-month low.

Besides the jobs issue, consumer prices below the Bank of Korea’s target, a trade dispute between the United States and China and financial turmoil in emerging markets were also cited as looming headwinds.

Some analysts believe that the BOK governor’s warning about risks represents a reduced chance for a rate hike this year.

“We concluded that it is unlikely for the Bank of Korea to raise the rate this year,” said Yoon Yeo-sam, an analyst at Meritz Securities.

“It is clear that the Bank of Korea is trying to leave doors open to a rate hike, but for the action to take place in either October or November, several conditions need to be met,” he said. “There should be signs of the trade row being eased, and major economic indicators, including consumer and business sentiment, should rebound in a meaningful way.”

Yoon played down the possibility of all the conditions being fulfilled this year.

But others say that the central bank will remain inclined to moving interest rates up this year.