The Moon Jae-in administration’s ambitious income-led growth policy is facing accusations that it is paradoxically contributing to job losses and cutting the income of the poorest Koreans.

The government’s solution to the dire employment numbers appears to be big spending measures - and big tax plans.

After Moon took office in May last year, he set up a monitor that shows the job situation in his office in the Blue House. 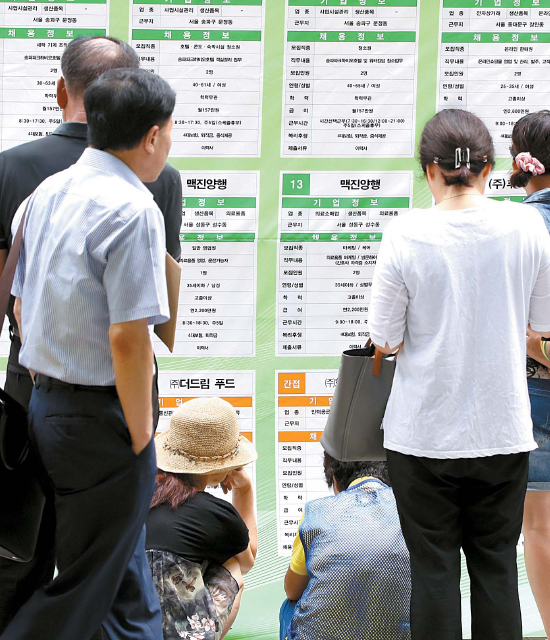 People look at job posting during a job fair held by the Jungnang District Office in eatern Seoul on Aug. 20. [YONHAP]

More than a year after the Moon administration vowed to create quality jobs to drive the economy forward, the country’s employment figures are mired in a rut.

Last month, only 5,000 jobs were created in July, the worst number in eight and a half years. The number of unemployed rose by 81,000 to top 1 million. The unemployment rate for those in their 30s, 40s and 50s, the most active participants in the economy, has been on the increase.

For those in their 40s especially, the drop-off in employment is shocking.

According to Statistics Korea, the number of people in their 40s employed in July was 6.67 million, down 147,000 from the 6.81 million employed a year ago. This was the largest job loss for this age group since the International Monetary Fund crisis, when 152,000 people in their 40s lost their jobs in August 1998.

People in their 40s are considered to be the highest spenders in the economy, as they are faced with their children’s educational expenses.

Experts say if more breadwinners lose their jobs, the economy will enter a vicious cycle, starting with a significant drop in consumption which will lead to stagnation.

Many people in their 40s who have lost their jobs are believed to be opening small businesses, like restaurants and convenient stores, as they are finding it difficult to find new jobs.

According to Statistics Korea, those in their 40s currently account for 22.6 percent of Korea’s small business owners. But with fierce competition and the rising burden caused by the higher minimum wage, many of these entrepreneurs are facing dire circumstances.

“The reason employment among those in their 40s shrank in July is believed to be largely because of jobs lost in temporary positions as well as in retail,” said Bin Hyun-joon, head of the employment statistics division at Statistics Korea.

With jobs shrinking, the income of the poorest Koreans has dropped. In the second quarter, the average monthly household income for the bottom 20 percent shrunk by 7.6 percent to 1.32 million won ($1,182) a month. This was a continuation from the first quarter, when monthly incomes dropped by 8 percent. On the contrary, the average income of the top 20 percent increased by 10.3 percent to 9.13 million won.

The jobs report and the widening income gap have prompted the government to hold emergency meetings nearly every day.

Yet the ultimate solution that the government came up with was spending more taxpayer money to fix the problem.

Last week, the government drew up a budget for next year worth 470 trillion won, the largest ever. It is a 9.7 percent increase from this year’s budget. This is the largest increase since 2009, when the government expanded the budget by 10.6 percent to prevent the economy from tanking during the aftermath of one of the world’s worst global crisis.

Especially the job budget alone has seen the biggest expansion as it was increased 22 percent compared to this year’s to 23.5 trillion won, also a new record.

The government said it expanded the budget in order to solve the structural problems affecting the economy, including employment, but also the polarization of wealth and the low birth rate.

The government said it is planning to focus its investments on creating jobs and stimulating the economy through innovative growth while improving quality of life, including improving the income distribution and expanding the social safety net.

“The government has decided to expand the budget although our economy is not faced with a major crisis, as there’s a need for financial help to resolve economic and social problems,” Economy and Finance Minister Kim Dong-yeon said on Tuesday when he announced next year’s budget proposal. 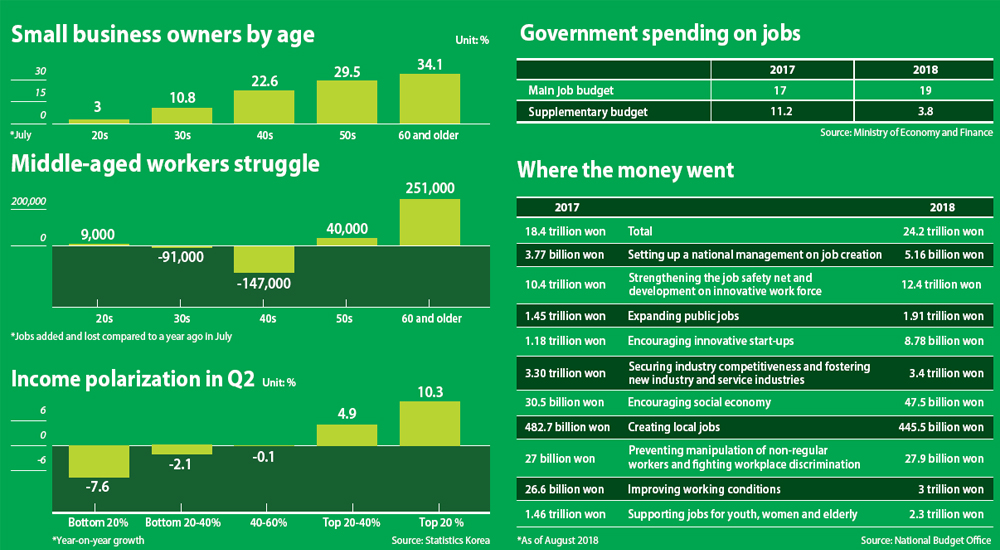 However, concern is growing over the government’s heavy reliance on taxpayer money for its income-led growth push.

The government will have spent a total 51 trillion won since last year to create quality jobs that it hopes would contribute to increasing wages and overall income.

This includes the 19.2 trillion won job budget for this year, which at the time, set an all-time record.

According to a report from the National Assembly Budget Office released on Aug. 19, the government has spent 42.6 trillion won on job policies since 2017.

It studied government money spent on 189 projects. In 2017, the government spent over 18 trillion won, while this year, 24.2 trillion won in spending has been allocated, a 32.1 percent increase.

The largest portion of the money, or 22.9 trillion won, was spent on setting up job infrastructure. The budget was used to enhance the job-related safety net and human resource development. Last year, 10.4 trillion won was spent, and so far this year 12.4 trillion won has been spent, and increase of 19.3 percent. But the budget included welfare projects that aren’t directly related to job creation, such as subsidizing company-run childcare centers. The government also spent 3.3 trillion won this year to improve working conditions, including converting contract workers to regular employees. This is a significant increase from the 53.7 billion won used for the same purpose last year. The government also spent more than 3.3 trillion won on jobs in the public sector. An additional 3.35 trillion won was used since last year to create jobs in social services, such as care for children and the elderly.

The massive budget is raising concerns about its impact on Korea’s fiscal soundness.

Currently, Korea’s national debt to GDP ratio is relatively low compared to other advanced economies, especially compared with that of Japan or the United States.

Last year, the country’s debt-to-GDP ratio was 389 percent. The government’s massive budget proposal for next year is based on its expectations for higher tax revenue.

Last year, the government collected 23 trillion won more in taxes than its initial estimates, and in the first half, 19 trillion won more have been collected. This was largely thanks to tax reforms that increased corporate taxes and income taxes on the wealthiest Koreans. The government expects to see an additional increase after its changes to the comprehensive real estate tax.

“In the next five years under the national fiscal management plan, we expect to collect more than 60 trillion won in additional taxes,” the finance minister said on Aug. 16.

The government estimated that average annual spending will increase by 7.3 percent between 2018 and 2022. That’s faster than the 6.9 percent annual average budget growth between 2007 and 2011. Under this plan, by 2020, Korea’s budget will likely reach 500 trillion won for the first time. The government’s fiscal income is expected to increase by an average of 5.2 percent between 2018 and 2022.

While government spending is increasing at a rapid path that could lead to a deficit, the nation’s debt is also growing at a fast rate. Between 2000 and 2016, Korea ranked fourth in national debt growth rate among the 35 Organization for Economic Cooperation and Development member countries. The top three countries were Latvia with 15.7 percent, Luxembourg with 14 percent and Estonia with 12.2 percent. During the same period, Korea’s national debt grew 11.6 percent.

Korea’s debt growth rate is faster than the debt growth of the European countries that faced sovereign debt crises in the early 2010s, including Ireland, whose debt grew 10.8 percent between 2000 and 2016, as well as Portugal with 8.9 percent, Spain with 7 percent, Greece 4.9 percent and Italy with 3.4 percent.

The budget office raised concerns over the Moon government’s tendency to increase jobs in the public sector. It said in a report released in August that the government could face a significant increase in expenditures, not from the immediate paychecks given to those hired in the public sector, but also in the future when it has to hand out pensions to retired employees, which could affect national fiscal soundness.

Asking for a change

Some experts predicted income-led growth’s heavy reliance on the state budget from the beginning of the policy.

“The government’s income-led growth policy tries to solve the problems of people in difficult situations with taxes, which is a temporary solution,” said Lee Byung-tae, a professor of business at the Korea Advanced Institute of Science and Technology. “If the government continues to solve economic issue with taxes, it will inevitably follow in the footsteps of Greece and Venezuela.”

Some Korean market experts have said the government should be focused on creating a business-friendly environment, rather than trying to stimulate the economy and create jobs through taxes.

“With the increased taxes from favorable business growth, the government could use it to improve welfare,” said Kim Yong-ha, a professor at Soongsil University.

Yet the government, particularly the Blue House, continues to deny that income-led growth is having a negative impact on the economy. Finance Minister Kim Dong-yeon and Blue House policy director Jang have been at odds. Kim repeatedly raised the need to listen to arguments that income-led growth is having a negative influence on jobs and income. Jang refused to accept this notion and said that demographic changes, such as the aging population and low birthrate, were to blame for the disappointing economic indicators.

Jang has argued that the government needs to use the budget to solve the Korean economy’s structural issues.

“The shocking jobs reports are closer to a policy failure than a structural problem,” said Sung Tae-yoon, an economics professor at Yonsei University. “Demographic change is something that has been happening for a very long time. But the worsening job market over the last six months can only be the result of the government’s economic policy.”