On the 31st floor of Lotte World Tower in Jamsil, southern Seoul, a polar bear-shaped robot is reading customers’ palms instead of their credit cards to take their payments.

The robot can also answer simple questions and make different 3D faces, depending on the conversation topic. If a customer complains about stress, Veny offers up a helpful suggestion: “There’s nothing like spicy food to beat stress. Why don’t you try the Hot Chicken Flavor Ramen and sprinkle cheese on top?” It throws out jokes, too, though they aren’t always winners: “A king that parks? Park-ing.”

Veny is one of many robots introduced at local brick-and-mortar retailers in August. Companies have recently been trying to add new automated technologies, like expanded electronic kiosks, to their stores. Several major retailers upped their game last month by introducing humanoid robots in hopes of building closer connections with customers than other machines could provide.

On Wednesday, the second-generation humanoid Pepper robot starting working at discount chain Emart’s Seongsu branch in eastern Seoul. It works three times a day for one and a half hours each shift at the store’s imported food section.

Developed by Japan’s SoftBank Robotics, Pepper is equipped with software from Emart to help it serve consumers at the discount store. This was the second launch after the discount chain introduced an early version of Pepper in May. Although identical in appearance, the new Pepper can move by itself and is more outgoing.

With its sensors and camera, the humanoid robot is on the lookout for consumers to offer assistance. “Sir, I can help you. Wait for me,” it says after spotting a customer. Pepper uses its screen to show items, escorts consumers to them, suggests the best sauce for dinner and waves goodbye.

Emart explained in a statement that it chose the imported food section as the test-bed for Pepper because it has many products that local shoppers are unfamiliar with. Unlike the mobile Pepper, Veny sits still on top of the cashier desk. The robot has a monitor on its belly through which consumers can pay at 7-Eleven.

Veny accepts credit cards, but its real trick is reading palms with its electronic paw. After registering your credit card information and doing a palm scan at a kiosk in front of the store, Veny will automatically retrieve payments from your account after you place your hand on his left paw. The service is currently limited to Lotte Card holders. 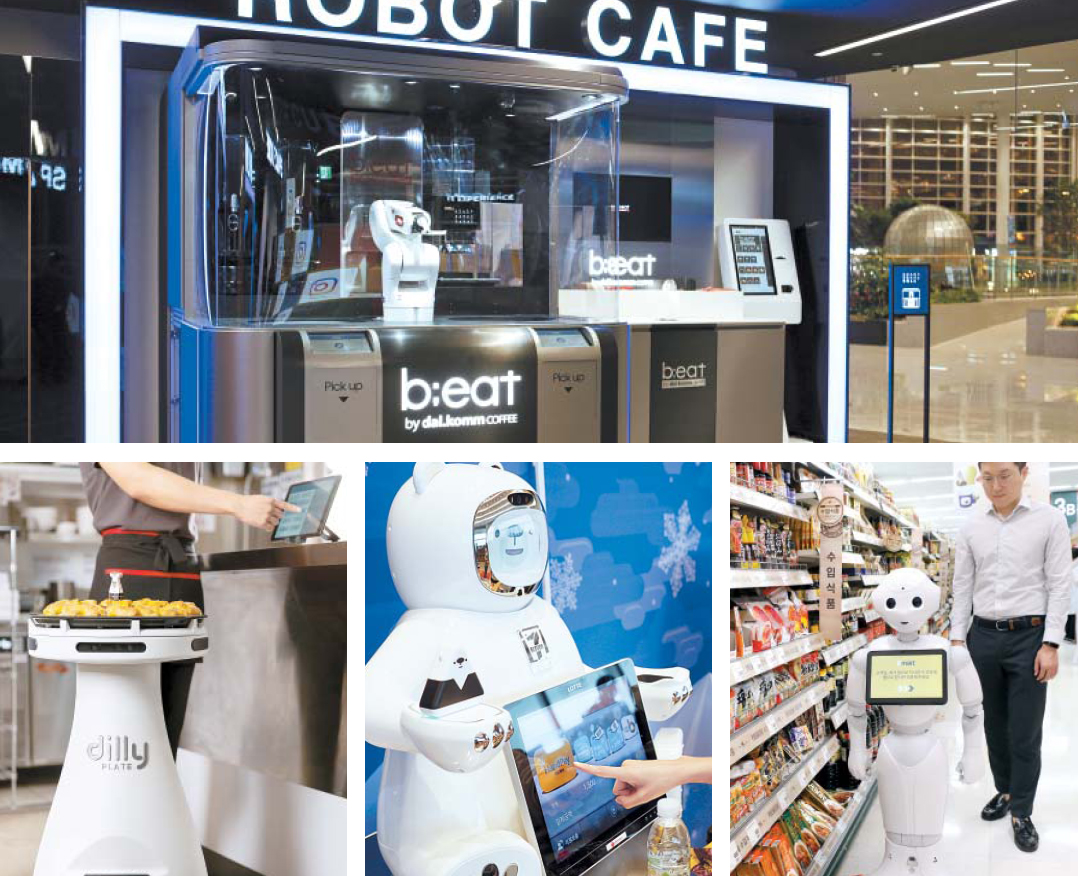 Veny’s cashier function is not very different from what existed before at the two 7-Eleven Signature branches, which were the first unmanned convenience stores in Korea when they opened in May last year. A major point the company focused on with Veny was charm.

The robot can recognize the face of past customers if they permit it to and can also talk about over 1,000 scenarios, including the fictional story of how he traveled to Korea all the way from the North Pole.

A pioneer in the restaurant business is delivery app Baedal Minjok’s Dilly Plate robot, which was developed by Bear Robotics. For two weeks starting from Aug. 6, the server robot had its first local test-run at a Pizza Hut restaurant in Mok-dong, western Seoul. Dilly Plate looks like a high stool with a round top just about the right size to hold a pizza pan. It can safely carry up to 22 kilograms (49 pounds) at once.

“The response was better than we expected,” said a Baedal Minjok spokesman who visited the branch several times during the test period. “One thing I noticed was that people got used to seeing Dilly running on the floor quite quickly. After one or two trials, servers seemed more comfortable working efficiently with the robot. Consumers were interested at first, and they quickly got accustomed to Dilly serving plates.”

B;eat has around 20 branches across Seoul. It takes orders through a mobile app or a kiosk beside the machine from seven iced or hot menu options, ranging from Americanos to cappuccinos. A coffee machine from the Swiss company Thermoplan makes the espresso-based beverages. B;eat’s robot arm moves plastic cups around to pour ice and coffee and delivers drinks to customers. It takes around three or four minutes to receive a drink after ordering it.

“B;eat runs 24 hours a day, so it works best at places like airports, terminals or public spaces like libraries and universities,” said Dal.Komm Coffee in a statement. After its launch in January, B;eat has also proved to be popular at office buildings.

While some people are intrigued seeing robots do human tasks, many also fear that this may be the start of robots pushing out the human workforce. Some local media outlets reported that the increased interest in robots in the retail industry is in line with the increased burden on companies due to the minimum wage hike.

Retail companies say otherwise. They say their ongoing automation efforts are aimed at enhancing service while leaving tedious, repetitive work to robots and offer an entertainment factor get customers into brick-and-mortar stores.

“An internal survey we did on store staff a few years ago showed that more than 60 percent of their work was taking care of payments,” said a 7-Eleven spokesman. “There are many more tasks that if done properly can lead to increased profits, such as placing orders, cleaning, arranging the shelves and stock management, and these can only be done by people, not robots … even for our unmanned stores, we need people to offer help on the new systems. It’s unlikely that technology will ever completely replace people at brick-and-mortar stores.”

The global market for reception robots was estimated at $1.4 billion last year. This is expected to reach $11.8 billion by 2025. Robot experts point out that Korea is still in its infancy in terms of service robots.

“The local robot industry is centered on industrial robots,” said a 2017 report from the Institute for Information and Communications Technology Promotion. “There are a few companies that develop robots for education or cleaning, but it is hard to find any in other service sectors.”

“Regarding reception and emotional robots, in particular, Korea has very few companies that have technology in the sector comparable to Japan and China, whose governments are supporting the market’s growth.”