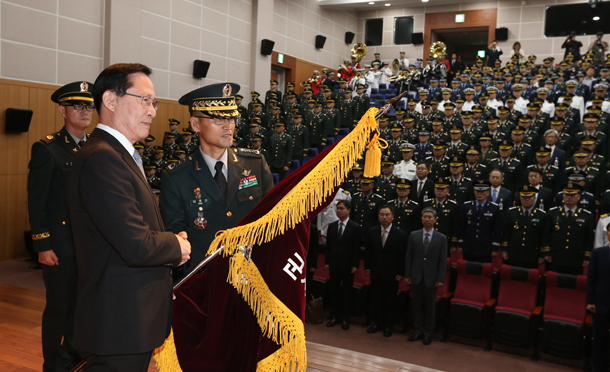 Defense Minister Song Young-moo, left, hands over the guidon of the Defense Security Support Command to Lt. Gen. Nam Young-sin, commander of the new unit, during a ceremony to launch the unit in Gwacheon, Gyeonggi, on Saturday. [YONHAP]

A new military unit in charge of internal discipline and intelligence gathering officially launched on Saturday with some restrictions after its predecessor, the Defense Security Command (DSC), was found to have drafted martial law plans during last year’s impeachment crisis and spied on the families of people who died in the Sewol ferry sinking.

Yet the new unit, called the Defense Security Support Command (DSSC), is still allowed to wiretap the military’s communications network under circumstances such as suspected espionage without obtaining a warrant, according to a directive revealed by the Ministry of National Defense on Sunday.

Some military analysts believe the reforms are not broad enough and fail to tackle core issues that prompted the DSC’s demise.

According to the ministry, some of the reforms include banning the DSSC from surveilling military personnel, including civilian workers within the Defense Ministry, unless the subjects are generals, officers about to be promoted to general, officers of third grade or higher in the nine-rank system, and commanders of “important” troops whom the defense minister has specially designated to be monitored.

But the directive also allows the DSSC to generally monitor all military personnel if they are suspected of acts that threaten national security, such as espionage.

If the DSSC intends to provide any information on a person that it collected through surveillance to a different unit, it is obligated to allow the monitored subject to explain his or her alleged misconduct and include that explanation in its final report.

Lt. Gen. Nam Young-sin, former commander of the Army’s Special Warfare Command, will lead the DSSC and said his new unit would review the surveillance documents of the old DSC and decide whether to send them to a military archive or use them for an ongoing internal investigation of the DSC’s martial law plan.

If any members of the DSSC are ever ordered to spy on civilians or interfere in domestic politics, the directive allows them to report the case to the military and reads that whistleblowers be protected of possible repercussions. Nam said such protections have never been established in the command before.

Still, similar to the predecessor DSC, the DSSC is allowed to freely wiretap the military’s communications network without a warrant, going against a recommendation by an advisory committee last month that suggested the new command ought to go through legal procedures to wiretap military lines, namely requesting a warrant from a local court.

The head of the DSSC will also still be allowed to have one-on-one meetings with the president, which critics said paved way for the Blue House’s political influence on the military.

Nam, however, stressed that his unit would fall under the control of the defense minister and said any reports to the president would pass through the minister first.