Lee Kang-so’s solo show “Disappearance,” which starts today at Gallery Hyundai, includes re-creations of the 75-year-old artist’s experimental works from the 1970s, including an installation of reeds covered with plaster, right, and a performance piece involving a living hen, left. [MOON SO-YOUNG]

With several big art events kicking off later this week, including the Gwangju Biennale, leading Korean galleries on Samcheong-dong street in central Seoul are launching solo exhibitions of renowned local artists to attract foreign art critics, curators and dealers coming to Korea to view the biennales. Here are some highlights.

However, he initially shocked the Korean art world with experimental performances, installations and photography in the early 1970s. A solo exhibition that focuses on these early works starts today.

It features re-creations of these works including “Void”(1971), an installation of reeds covered with plaster, and “Disappearance”(1973), a makgeolli bar created inside the gallery by the artist that viewers can sit in.

There is also a re-creation of a sensational performance art piece “Untitled 75031,” which Lee first presented in the 1975 Paris Biennale. A living hen stayed in the gallery for a few days and was later returned to its farm. Now, the viewers will see only traces of the hen on plaster powder spread on the floor. Photos of the hen performance in 1975 are hanging on the wall.

“My works are ‘experience art’ rather than conceptual art,” the artist told reporters in a preview last month. “I only make the playground and the viewers should play in their own ways.”

As for his painting, he said “I only intermediated or caught the flow of energy in nature. I don’t think I’m a dansaekhwa artist.” 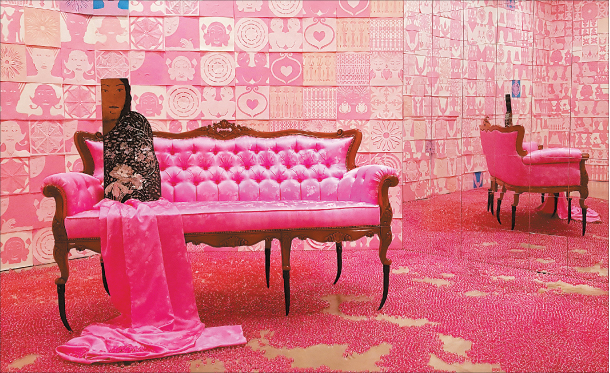 Hakgojae Gallery, from today to Oct. 14.

Yun Suknam, 79, often dubbed “the godmother of Korean feminist art,” is best known for colored wooden sculptures that depict her own mother and women in history who were belittled or forgotten, such as poet Yi Maechang and philanthropist Kim Man-deok.

Participating in the 1996 Venice Biennale, the 2014 Gwangju Biennale and other art shows, she has gained international fame for dealing with women’s stories from a feminist perspective in the still-patriarchal society of East Asia and for the unique forms of her works, which are partly flat and partly three-dimensional - in between paintings and sculptures.

But the artist herself isn’t satisfied with the medium that brought her fame and, in this solo show, presents self-portraits done in the Korean traditional color painting style, which she learned in her 70s. “This exhibition is special also because it focuses on myself for the first time, instead of my mother and mothers in history,” Yun told reporters in a preview last week.

The solo show also includes an installation of colored sculptures in Yun’s signature style, which depict the artist with her mother and sisters under the title “We Are a Matrilineal Family.” And there is a spectacular installation “Pink Room V,” which symbolizes “the anxiety and nervousness” she went through when she was a housewife before she started painting around the age of 40. 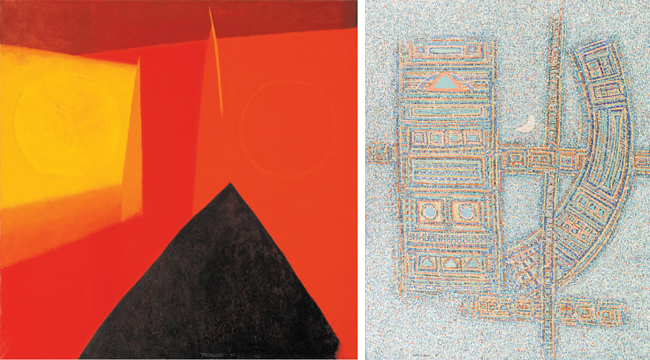 Kukje Gallery K2 and K3 spaces, from today to Oct. 7

Yoo Youngkuk (1916-2002) is regarded as one of the most important pioneers in Korean abstract art along with Kim Whanki. This solo exhibition features 31 pieces of Yoo’s paintings that span his entire oeuvre. The paintings are characterized by rich primary colors bearing light and geometric shapes reminiscent of nature, in particular mountains and the sun rising or sinking beyond the mountains.

After the large-scale retrospective of Rhee Seundja (1918-2009) at the National Museum of Modern and Contemporary Art (MMCA) Gwacheon in Gyeonggi wrapped up in late July, Gallery Hyundai is presenting another solo show to celebrate what would be the artist’s 100th birthday.

Rhee was part of the first generation of Korean abstract artists active in Paris and one of the few Korean women in the art world at the time. This exhibition focuses on paintings from Rhee’s “Woman and the Earth” series in the 1960s, which earned her recognition as an artist in her early days in France.